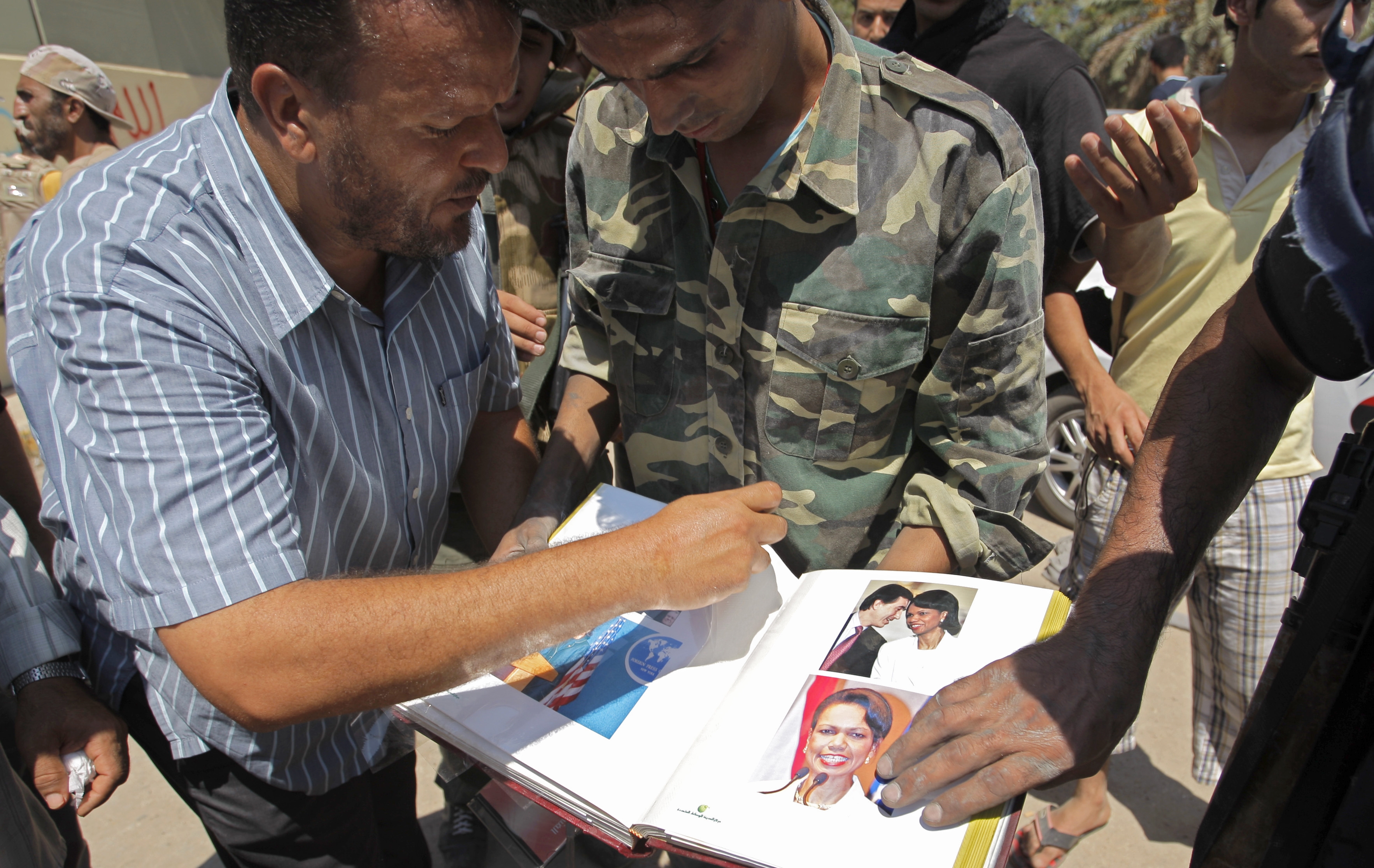 When Libyan rebels raided Muammar Qaddafi's compound in Tripoli this week, they ransacked the place, finding evidence of the strongman's wealth -- and his preoccupation with former U.S. Secretary of State Condoleezza Rice.

The image above shows rebel fighters on Wednesday inspecting a photo album, with a series of pictures of Rice, found inside Qaddafi's compound, known as Bab Al-Aziziya.

Qaddafi's interest in Rice has been well documented. In a 2007 interview, as the Washington Post noted, Qaddafi called her "my darling black African woman."

"I admire and am very proud of the way she leans back and gives orders to the Arab leaders," he said, in what the Post described as a back-handed compliment. "She beckons to the Arab foreign ministers, and they come to her, either in groups or individually... Leezza, Leezza, Leezza... I love her very much. I admire her, and I'm proud of her, because she's a black woman of African origin."

Rice met with Qaddafi at his compound in 2008, making her the first U.S. secretary of state to visit the Libyan capital in more than five decades. For her part, Rice said the trip demonstrated "that the United States does not have permanent enemies."

The visit must have left an impression on Qaddafi because an official list of gifts the Bush administration received in 2008 showed that the Libyan leader gave Rice three items: a diamond ring in wood box, a "DVD with musical instrument," and a locket with Qaddafi's photo. The gifts, worth a combined total of $212,225, were sent to the General Services Administration, which takes most diplomatic gifts and puts them on display in government buildings.

As the Libyan rebels took control of parts of Tripoli, it made for a variety of interesting images. The rebels at left posed for a photo in a couch in the home of Qaddafi's daughter Aisha. The couch is framed by a golden mermaid with Aisha's face.

Below, rebel fighters shoot in the air as one man climbs atop the iconic statue of a golden fist gripping an American plane which stands outside Qaddafi's compound.

The rebels continued to battle forces loyal to Qaddafi for control of Tripoli on Thursday. CBS News correspondent Barry Petersen reports considerable gunfire around a series of buildings on the south side of Qaddafi's compound, and Reuters reports rebels claim to have surrounded Qaddafi or one of his sons inside.