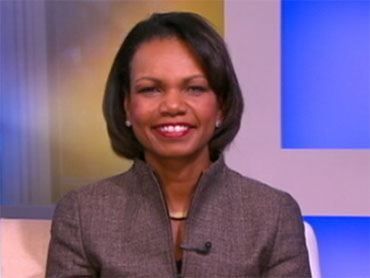 Former Secretary of State Condoleezza Rice says her father was "attracted to radical black politics" -- even though he "was a quite conservative man himself."

Co-anchor Harry Smith pointed out that, according to the book, Stokely Carmichael, a leader of the Black Panther movement, came over to the Rice home for dinner.

Rice told Smith, "My father really was sort of attracted to radical black politics, despite the fact that he was a quite conservative man himself, Republican all of his life. But he really, I think, was attracted to the way they confronted racism, not with humility and sublimation, but really with strength. And so,I did have a lot of associations that in retrospect would perhaps be viewed a little strangely."

Rice, diplomat, political scientist and concert pianist, became the first black woman to serve as U.S. Secretary of State, under former President George W. Bush. But before all that, she had to survive her childhood in the racially-segregated and violent city of Birmingham, Ala.

And in her new book, Rice gives major credit to her parents.

On the show, Rice recalled her segregated childhood, saying, "Birmingham really had two parallel societies. On the one hand, you had the white world. Then, you had the black world. And the twains didn't meet very often. My parents were part of a middle-class black community that believed in faith and family and education. But, of course, they were quite ordinary people, a school teacher, minister and high school guidance counselor. But the circumstances to teach a little girl you might not be able to have a hamburger at a Woolworth's lunch counter -- because you couldn't under segregation -- but you could be President of the United States if you wanted to be -- and that was really the way they raised me."

"What a dichotomy," she agreed.

In her book, Rice discusses how she hoped to not have to stop at gas stations on family trips to use the bathrooms.

"Because restrooms were segregated," she explained on the show. "And, of course, the restrooms for 'coloreds,' as they were called at the time, were pretty awful. My mother wouldn't go, simply wouldn't go into them."

An only child, Rice, Smith remarked, was doted on "something fierce."

Rice responded, "I had wonderful parents, who loved me unconditionally and gave me really every opportunity that they could even remotely call an educational opportunity. But, it was really the ethic in my community more broadly. My parents' friends, also, believed in the strength of educational values and preparation and, frankly, being twice as good so that you can show the white man that you were capable."

She continued, "If you were going to have a productive life and if you were going to control your circumstances, my parents believed that you might not be able to control the circumstances, but you could certainly control your response to them. And education was a kind of armor, preparation was a kind of armor that allowed you to do that. And so, if you had to be twice as good, so be it. And it wasn't a matter of debate, by the way, it was just sort of said that way."

For more with Rice and her childhood, click on the video below: