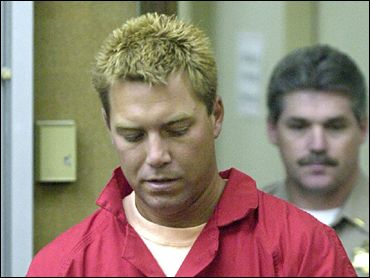 Defense attorneys again tried to deflect suspicion from Scott Peterson at his murder trial Wednesday, pointing to a prostitute who police say stole checks from Peterson's mailbox after his pregnant wife disappeared.

Modesto police Detective Mike Hermosa did not indicate the prostitute, who stole the checks to trade for drugs with an Asian gang, was ever a suspect in Laci Peterson's disappearance. But on cross-examination, defense lawyer Mark Geragos used her to try to shift suspicion from his client.

"Were you able to go and check out her alibi for the 24th?" Geragos asked, referring to Dec. 24, 2002, the date Laci was reported missing.

"No, I never did that, sir," Hermosa replied.

Prosecutor Dave Harris noted that the checks were stolen after Laci vanished, meaning the woman could not have been involved in her disappearance.

Geragos then returned to accusations that police conducted a sloppy investigation.

Veronica Holmes, a Modesto police community service officer, testified that police videotaped an interview with Scott Peterson but no batteries were put in a tape recorder, so the footage had no sound.

Holmes said she placed the tape in her drawer and "just forgot about it." Geragos also noted it was just turned over to the defense this year.

A string of other detectives were called by the prosecution to testify about the extensive search for evidence.

Detective David Hawn said he collected a pea-sized piece of concrete from the Petersons' dining room during a search in February 2003, but he did not elaborate on its significance.

Prosecutors claim Peterson crafted cement anchors to weight his wife's body down in San Francisco Bay after he allegedly killed her in their Modesto home.

The remains of Laci Peterson and the couple's fetus washed ashore April 14, 2003, two miles from where Peterson claims he was fishing alone the previous Christmas Eve. He could face the death penalty or life without parole if convicted.

Later Wednesday, jurors were shown graphic photos of Laci Peterson's badly decomposed body while a criminalist testified about evidence collected from the remains.

Among the items obtained from the body for analysis were four hairs, a piece of red plastic, some plant material and a 15-inch-long piece of duct tape, said John Nelson, who works in the Contra Costa County Sheriff's Department crime lab.

"Were you able to take a head hair sample?" Harris asked.

"Was the head present at the autopsy?" Harris asked.

"There was no head," Nelson said.

Nelson also catalogued some of the evidence found near the body - a plastic tarp, strips of duct tape and a piece of rusty metal.