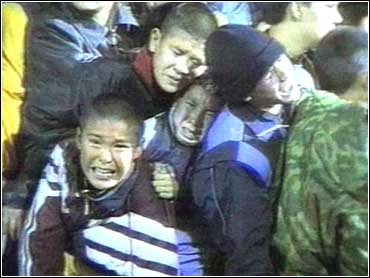 Nineteen spectators were injured at a Russian rock concert after they tried to move on to a stadium field at the urging of the performer and were crushed against barriers, NTV commercial television said Wednesday.

Two fans were in a critical condition — an 18-year-old man with a broken back and a 14-year-old girl with serious head injuries.

NTV broadcast footage from Tuesday's concert in the far eastern city of Yakutsk showing fans scrambling down the grandstand after rock star Zemfira urged them to move on to the stadium field.

"Only come half way (across the field)," she told the crowd.

A bottleneck quickly developed into a crush and police were shown vainly trying to push back the mostly teenage fans.

Ambulances were unable to enter the stadium for 30 minutes while officials frantically looked for keys to the main gates.

"Calls were put through to the mayor's office and to health ministry officials," Stalina Zharayeva, a senior doctor who treated the injured at the stadium, told NTV. "Once they were found, we were able to attend to everyone."

A series of similar accidents has marred public events in former Soviet republics in recent years.

Fifty-four people died in a stampede in the Belarussian capital of Minsk last year, when revelers at a beer festival rushed into an underground railway station to get out of a rainstorm.