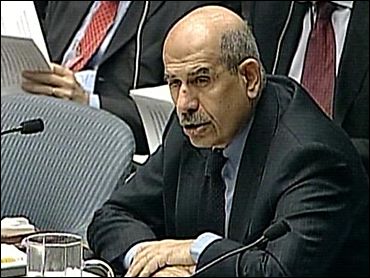 Alarmed by reports of widespread looting at Iraq's main nuclear site, the head of the U.N. atomic watchdog organization has asked the United States to let it send a mission to the facility, a spokeswoman said Monday.

Accounts given by Iraqis who work at the Tuwaitha site indicate that "the looting continues," said Fleming.

U.S. officials had not responded to ElBaradei's letter, said Fleming, who refused to give further details.

While Iraq has around 1,000 radioactive "sources" — sites where radioactive materials are used in industry or medicine — the Tuwaitha facility near the eastern border city of Kut presents by far the greatest source of concern, Fleming said.

The Tuwaitha complex, run by the Iraqi Atomic Energy Commission, was involved in the final design of a nuclear bomb before Iraq's nuclear program was destroyed by U.N. teams after the 1991 war.

IAEA inspectors visiting Tuwaitha before the war as part of the U.N. search for weapons of mass destruction in Iraq had catalogued tons of partially enriched and natural uranium, some believed suitable for processing into weapons-grade material.

While computers, furniture and scientific equipment have been taken, it was unclear whether nuclear material also has been stolen from the site, about 100 miles southeast of Baghdad. U.S. officials had reassured the U.N. agency that the site and its nuclear materials had been secured.

A dispute between Washington and the U.N. nuclear watchdog on what role the IAEA should play in postwar Iraq has delayed inspections of Tuwaitha's nuclear storage depots. U.S. troops last month found the door forced open to one of them.

Beyond concern that radioactive material could be processed into nuclear warheads, experts also fear that terrorists could simply use it for so-called dirty bombs.

A dirty bomb is made by attaching radioactive material to a conventional explosive to disperse it over a wide area.

The letter by ElBaradei was written before a Washington Post report Sunday that a site close to Tuwaitha also appeared to have been looted and that it was impossible to say whether nuclear materials were missing. Fleming said the agency had no information on that report and that Tuwaitha was the IAEA's main focus.

Any mission to examine the Tuwaitha site would be independent of a standing request from the IAEA to permit the resumption of the agency's search for evidence that Iraq had developed or was developing nuclear weapons, said agency officials.

Agency inspectors and U.N. experts looking for biological or chemical weapons resumed their work in November after a four-year pause, and left before the U.S.-led invasion of Iraq began March 20.

Making their case for war, U.S. officials claimed that Baghdad was hiding its weapons of mass destruction or programs to make them. While the U.S. search for evidence of such arms or program is intensifying, Washington has resisted requests for U.N. inspections to resume.

ElBaradei, in an interview with the German ZDF television network to be aired Tuesday, repeated his assertion that "there was no evidence" in the nuclear area to justify the Iraq conflict.

There were, however, "question marks" over whether Baghdad had biological and chemical weapons, he said.

In the American hunt for Iraq's banned weapons, drums of suspicious chemicals turn out to be crop pesticide; a cache of white powder is found to be explosives.

More than six weeks into the Iraq campaign, there has been a string of false alarms but no discovery of what the Bush administration said was its main justification for going to war — chemical, biological and nuclear weapons programs.

The war was waged over the issue of weapons of mass destruction and, "we can't push it to one side just because there has been a regime change," he said. "I do not believe that the international community would be satisfied so long as it is not we, the U.N. weapons inspectors, who go there and examine the findings."