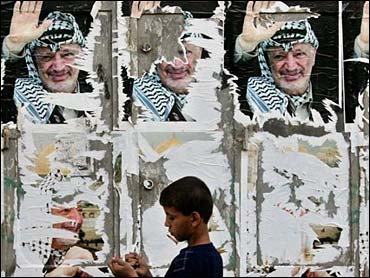 A gravely ill Yasser Arafat was reported in a coma Thursday, and doctors at the hospital treating the Palestinian leader said he was alive despite reports that he had died.

Luxembourg Prime Minister Jean-Claude Juncker told reporters at a summit of European leaders in Belgium that Arafat had died, but he later retracted the statement.

"It was a misunderstanding," government spokesman Lucien Michels said.

After Juncker's initial statement, a spokesman for the military hospital where Arafat was rushed Friday said he was still alive.

Palestinian Prime Minister Ahmed Qureia said there had been no change in Arafat's condition. Palestinian officials said Arafat was in a coma in the intensive care unit.

Arafat's chief of staff, Ramzi Khoury, called an Associated Press reporter from Paris and told him: "I am standing next to the president's bed, he is in grave condition."

In Washington, President Bush was asked by a reporter for his reaction to reports that the Palestinian president had died.

"My first reaction is God bless his soul," Bush said at the nationally televised news conference. "My second reaction is that we will continue to work for a free Palestinian state that's at peace with Israel."

Arafat was taken to intensive care after his condition worsened. French President Jacques Chirac went to the hospital Thursday and saw Arafat and his wife, "to whom he expressed his best wishes," Chirac's office said. The president also met members of the Palestinian Authority and doctors "who are doing everything possible for the health of the president," Chirac's office said.

French television station LCI quoted an anonymous French medical official as saying Arafat was in an "irreversible coma" and "intubated" — a process that usually involves threading a tube down the windpipe to the lungs. The tube is often connected to a life support machine to help the patient breathe.

A prolonged Arafat incapacitation — or death — could have profound impact on the Middle East. There are fears of unrest among Palestinian factions, which Arafat, viewed as a national symbol by even some who opposed him, was largely able to prevent. Furthermore, chaos in the West Bank and Gaza could make any cooperation with Israel even more difficult.

Arafat was rushed to the Percy Military Training Hospital outside Paris for emergency treatment Friday. Since then, his condition has largely remained a mystery, with Palestinians issuing conflicting reports.