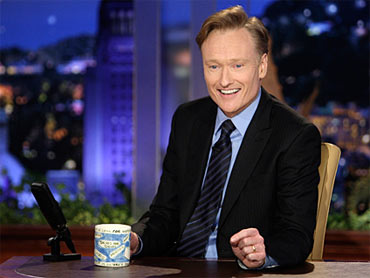 Conan O'Brien told NBC good riddance Thursday in a $45 million deal for his exit from "The Tonight Show," allowing Jay Leno to return to the late-night program he hosted for 17 years.

Under the deal, which came seven months after O'Brien took the reins from Leno, O'Brien will get more than $33 million, NBC said. The rest will go to his 200-strong staff in severance.

Compensation for O'Brien's staff and crew was the final hurdle in negotiations. O'Brien was said to have been "dug in" on the issue out of concern for the workers, while NBC said this week that it had already agreed to pay "millions of dollars to compensate every one of them" and deemed it a public relations "ploy."

On Wednesday night's show, speaking of a push to get a severance deal for his staff, O'Brien joked, "At first they thought I was gullible. They said the staff would be taken to a big farm, where they'd be allowed to run free forever."

O'Brien's final show will be Friday, with Tom Hanks scheduled to appear as well as Will Ferrell - his first guest as "Tonight" host last June.

Leno will return to "Tonight" on March 1.

"In the end, Conan was appreciative of the steps NBC made to take care of his staff and crew, and decided to supplement the severance they were getting out of his own pocket," his manager, Gavin Polone, told TheWrap.com and The Wall Street Journal, among the first media oulets to carry word of the deal. "Now, he just wants to get back on the air as quickly as possible."

O'Brien will be free to begin another TV job as soon as September, NBC said. There has been much speculation on where he might go next. ABC (which airs "Nightline" and "Jimmy Kimmel Live!") has said it wasn't interested, while Fox, which lacks a network late-night show, expressed appreciation for his show - but nothing more. Comedy Central has also been mentioned.

A spokesman for O'Brien said he would be unavailable for comment.
Even though NBC is paying O'Brien so much to leave, the decision might still make financial sense with higher ratings overall after Leno moves back to late-nights, TV Guide Executive Editor Craig Tomashoff observed to CBS News. "The main thing that NBC will get out of this is, hopefully, a little bit better ratings in prime time," he says. ... A lot of this is coming from local affiliates who've seen phenomenal drops in ratings because no one is watching Leno" during primetime.

TheWrap's Sharon Waxman agreed, telling "Early Show" co-anchor Maggie Rodriguez Thursday, "The big question remains, will the viewers come back? Will the ratings go back to where they were? And the irony, of course, is that Conan's ratings have been through the roof since this whole thing started."

O'Brien landed the "Tonight" show after successfully hosting "Late Night," which airs an hour later, since 1993. But he quickly stumbled in the ratings race against his CBS rival, David Letterman.

Under Leno, the "Tonight" show was the ratings champ at 11:35 p.m. Eastern, but he proved an instant flop with his experiment in prime time.

Last week, NBC announced that the five-hour vacancy in prime time left by Leno will be filled by scripted and reality fare calculated to bring NBC affiliates a more robust lead-in audience for their local news than Leno had been delivering. A provisional slate of shows will include new and veteran NBC dramas, a comedy panel series produced by Jerry Seinfeld and "Dateline NBC."

It had been no secret that the 46-year-old O'Brien was scoring puny ratings numbers on "Tonight," averaging 2.5 million nightly viewers, compared with 4.2 million for Letterman's "Late Show," according to Nielsen figures.

It was even more obvious that "The Jay Leno Show," airing weeknights at 10 p.m. Eastern, was a disaster. Mostly justified by the network for its bargain-basement production budget, it not only was critically slammed, but also found a disappointing popular reaction. It has averaged 5.3 million nightly viewers since its fall debut - about the same number that watched Leno's final "Tonight" season, in a time slot when far fewer viewers are available. By comparison, the season's top-rated 10 p.m. network drama, CBS' "The Mentalist," has an average audience of 17 million.

But few observers expected the abrupt upheaval that erupted publicly just two weeks ago, when two Web sites posted un-sourced stories that the 59-year-old Leno's show would soon be canceled or moved into O'Brien's late-night domain.

Days later, NBC executives unveiled a plan to restore Leno to 11:35 p.m. with a half-hour program, then slide O'Brien's "Tonight Show" to 12:05 a.m., followed by "Late Night With Jimmy Fallon," also pushed back a half-hour.

Disgruntled affiliate stations, which have lost viewers and advertising revenue for their late local newscasts since "The Jay Leno Show" premiered, appeared to spur NBC's sudden changes. The 210 local NBC stations saw their late news audience drop, on average, by 25 percent in November compared with the previous year among desirable 25- to 54-year-old viewers, with the Leno experiment costing the stations collectively $22 million over a three-month period, according to the research firm Harmelin Media.

In a clear vote of no confidence, some rebellious stations were threatening to drop "The Jay Leno Show" and air their own programming.

The network had been counting on O'Brien's cooperation, and wanted an answer quickly, so it could have the configured lineup ready to launch after the Winter Olympics, which will dominate NBC's schedule from Feb. 12-28. But O'Brien threw a wrench into NBC's plans, and triggered a public relations firestorm for the network, when he issued a statement rejecting the offer to delay his show to make room for Leno's return.

O'Brien said that shifting "Tonight" would "seriously damage what I consider to be the greatest franchise in the history of broadcasting," and he declared his disappointment that NBC had given him less than a year to establish himself as host at 11:35 p.m.

The escalating mess furnished plenty of material for jokes by competitors of Leno and O'Brien, as well as the two NBC hosts at its center, who bashed each other and their network.

As recently as Wednesday's monologue, Leno said the rainy weather in California "couldn't have come at a worse possible time. Today was the day NBC was supposed to burn down the studio for the insurance money."

Online, many have leaped to O'Brien's defense in recent days and applauded his stand against NBC. "Team Conan" became a popular Twitter topic for viewers who pledged their allegiance to O'Brien.

An O'Brien portrait also circulated as a badge of support. Referring to the "Tonight" show host's playful nickname, it read, "I'm With Coco," and featured a black-and-white picture of a regal-looking O'Brien standing in front of an American flag. The only color: his shock of orange hair.

For many observers, this clash of talk-show hosts recalled the late-night follies played out by NBC in the early 1990s as the network wavered confoundingly over who - Letterman or Leno - should inherit "The Tonight Show" from Johnny Carson.

The current revival of the late-night follies was set in motion nearly six years ago, in what was hatched by NBC executives as a farsighted strategy to ensure an orderly transition.

In the fall of 2004, the network announced that O'Brien would take over for Leno in 2009. That move by NBC - and endorsed by Leno, despite his clear aversion to leaving "Tonight" - was designed to keep O'Brien from jumping ship when his contract expired. "Tonight" was the prize O'Brien felt he had earned. He joked that he was looking forward to being on an hour earlier, "at a time when people can see me."

As years passed and Leno strengthened his grip as the late-night ratings champ, NBC anguished over how to keep him usefully occupied on the network somewhere other than "Tonight," and safely out of reach of rival networks who were courting him.

In late 2008, the network caught the public and the industry by surprise with its virtually unprecedented scheme: a new Leno hour "stripped" in prime time from Monday through Friday.

"A lot of people were shocked," Leno joked to reporters when the plan was announced. "They didn't know NBC still had a prime time."