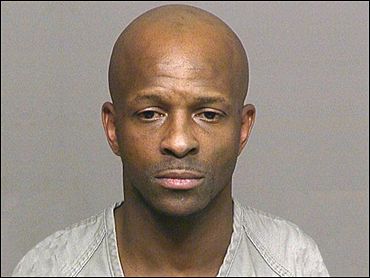 A prisoner facing a life sentence made a fake gun out of paper and cardboard and escaped from a courtroom Monday.

McCord is described as desperate and dangerous. He remained at large Tuesday morning.

He was in the courtroom for a motion hearing and his handcuffs and shackles had been removed.

"We're concerned that he's desperate because obviously, at this point, he doesn't have a lot to lose since he is facing life in prison without the chance of parole," she said. "He's very dangerous because he has threatened our corrections officers."

Deputies were contacting relatives and victims and asking that anyone who sees him call 911.

McCord is described as black, 6-foot-1, 190 pounds, with a shaved head. He was wearing a white T-shirt and gray jail pants.

A $1,000 reward was offered through Crimestoppers.

"He knew he was going to be going for life in prison, so I'm sure he was very desperate," Troyer told Northwest Cable News.