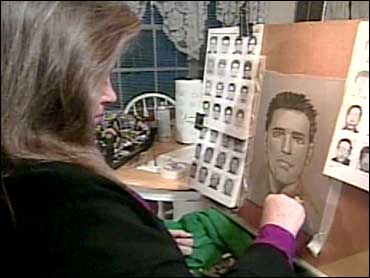 When people refer to Lois Gibson as a "con artist", they mean that in a good way.

The Texas woman is a sketch artist for the Houston Police Department and her work has helped nab so many suspects, it's landed her in the record books. CBS News Correspondent Sandra Hughes reports for The Early Show.

Crime fighting has always been Paul Deason's career, but one awful January night 13 years ago, the Houston police officer became a crime victim during a routine traffic stop.

Deason recalls, "When he got three to four feet from me, he just started shooting."

Shot in the head,and then run over by his assailant, Deason still bares the scars. He was rushed into surgery, then heavily sedated. One of the first investigators he met with was Lois Gibson, the Houson Police Department's forensic sketch artist.

Gibson says, "You just ask about the expressions and that's when they relive the feelings they had and sometimes they'll talk on and on."

The result was a dead-on image, and an arrest days later.

A crime victim herself, Lois Gibson was raped as a young woman. She says, "I bring that up right away. And that's a tool for me."

A tool she used with a young girl, whom we'll call Ann (not her real name). Just last year, the Houston high schooler was assaulted by two men as she waited for her school bus.

Ann says, "If it wasn't for that sketch, they probably wouldn't have been caught."

Just three days after Gibson met with Ann, both men were under arrest. Ann says it was easy for her to feel comfortable with Gibson.

Gibson says, "All you got to do is care. And that's easy for me."

But what wasn't easy was getting hired in the first place.

Gibson says, "I had to go to the Houston Police Department and talk them into using a housewife, doing something they hadn't done before. They'd never used an artist."

To convince them, she says, she just "dared them."

They took the dare and she's been sketching ever since. Still, it took years to be accepted for what she does.

Gibson says, "Law enforcement like any bureaucracy is slow to change. That's why it took Houston Police Department 7 1/2 years to hire me full time."

Gibson is one of only 19 full-time police sketch artists in the country. It's not for lack of talent. There are many trained artists. But most police departments still don't recognize forensic sketching as a crime-fighting tool.

Despite highly publicized cases like Elizabeth Smart's, when a sketch of Brian Mitchell helped solved the case, Gibson says some cops just don't get it.

"It's time for law enforcement in this country to embrace compository," she says.

Her sketches catch the crooks 30 percent of the time. Fingerprints solve only 10 percent.

Showing a few of her sketches, Gibson shares her success stories. "How upset would you be if a 10-hour-old baby was kidnapped from your hospital bed," she asks, pointing at the sketch of the criminal, "That's one of the best sketches I ever did."

She counts more than 700 cases solved through sketching and has landed in the Guiness book of World Records.

More than a champ, she's a friend to the victimized and a tool her boss at the Houston P.D. calls invaluable.

"She captures the essence, the total essence, of what the individual looks like," Lt. Thomas Jennings says.

Officer Paul Deason was convinced 13 years ago and is still a believer. He says, "I don't understand why more police departments don't have people like Lois. She's definitely a great asset. And without her, we'd be lost."

And so would Gibson. Twenty-one years of sketching criminals has been a therapy for her as well, without leaving her with any nightmares.