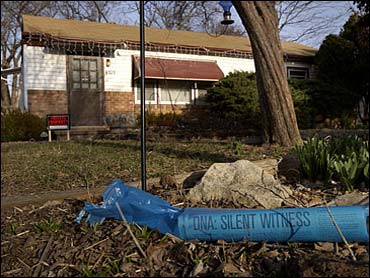 Dennis Rader came to his pastor in January with a floppy disk, saying he had the agenda of a church council meeting and needed to run off copies on a printer. The pastor obliged.

The head of Christ Lutheran Church inserted the disk into a computer, thinking it was nothing out of the ordinary. But that routine act may have cracked the BTK serial killer case.

Last Friday, four law enforcement officers came to Pastor Michael Clark's church with a search warrant and asked who had access to the computer. An electronic imprint in a disk sent to a Wichita TV station by the BTK killer had been traced to the church.

The officers, speaking softly but firmly, then said Rader had been arrested as the suspected BTK killer.

The pastor was stunned. Three times, he asked them to repeat it. "The world changed that very moment," Clark would later tell his congregation.

A computer disk appears to be among the key pieces of evidence that led police to Rader, the 59-year-old church council president and former Cub Scout leader who was charged Tuesday with 10 murders in the BTK killings that terrorized this city over three decades.

Though police have been tightlipped about why they believe Rader is the BTK killer — the judge in the case has ordered the files that explain why police arrested Rader sealed — some details of the evidence against him have emerged. Among them: the disk, DNA samples, surveillance and mocking letters with clues and grisly souvenirs.

"This was a police case that covered the span of three decades, and I don't think there's any one thing that would have cracked the case," said Richard LaMunyon, a former Wichita police chief who ran the department during most of the BTK killings.

The BTK killer — his own nickname, standing for "Bind, Torture, Kill" — was suspected of eight murders committed in the 1970s and '80s. But authorities have linked two additional victims to the serial killer. The most recent slaying was in 1991. All the victims were strangled and one was stabbed.

Rader, who is being held on $10 million bail, was arrested on Feb. 25 in suburban Park City, where he worked as a code enforcement supervisor.

Rader was probably considered a possible suspect in the 1980s. LaMunyon said a task force called "The Ghostbusters" compiled several lists, including thousands of males who attended Wichita State University in the 1970s, and a list of employees at the Coleman Co., a major employer. A letter from the killer to police had been traced to a copier at WSU, and two of his victims had worked at Coleman.

Some of the biggest help to investigators may have been the messages and packages sent by the killer to police and the news media in the past year.

When the BTK killer resurfaced last March — the 30th anniversary of the first crimes — police took advantage of advances in technology to re-examine old evidence as well as analyze new clues.

"Once he raised his head again and started gaming again, taunting the police — that's a very positive development and breeds new life into this case," said Gregg MCCrary, a retired FBI profiler. "If he had been incommunicado and had not reached out, this case may have never been solved."

LaMunyon said he detected a distinct difference in tone between the messages the BTK killer sent in the 1970s and '80s and those of the past year.

But the messages of the last year, LaMunyon said, were far less harsh and were more of a puzzle. "The pattern at the end was to get himself identified and caught," he said.

Among the materials the BTK killer sent to the media were a cryptic word puzzle mailed to a local television station in May that included dozens of hidden words, including a grouping of letters spelling "D. Rader" and 6220, the number of Rader's street address. The names of jobs that could be used as disguises to gain entry into homes also were in the puzzle.

And this week, the TV station revealed that a package found in a Wichita park in December contained the driver's license of one of BTK's victims along with a doll, its head covered with a plastic bag, its hands bound with pantyhose. The package was found by a man who showed the package to the station, which videotaped it.

Police also had scientific evidence that was not available decades ago when the 17-year crime spree began.

DNA samples have linked Rader to the killings, according to Gov. Kathleen Sebelius. Police have said they obtained semen from the crime scenes, even though the killer did not sexually assault his victims.

The Eagle reported Thursday, citing unidentified sources, that investigators had obtained DNA before Rader's arrest from a tissue sample that came from his 26-year-old daughter's medical records. They took it without her knowledge, to keep Rader from discovering they were zeroing in on him, the newspaper said.

Another possible clue for investigators may have come from surveillance that was reportedly conducted on a possible BTK suspect. A Home Depot spokeswoman said one of the company's stores in Wichita was involved in the investigation, but she would not elaborate.

"We ensured each of these cases was handled in a way that all the evidence was categorized, all the records were put into files, so if and when needed, the officers would be able to pick it up and move forward," he said. "When you try to coordinate a police investigation over three decades, that's quite a chore."

LaMunyon said he was not surprised the BTK suspect was a long-standing resident of the Wichita area.

"We always thought he was someone in our community," he said. "We never thought for a moment that he left."