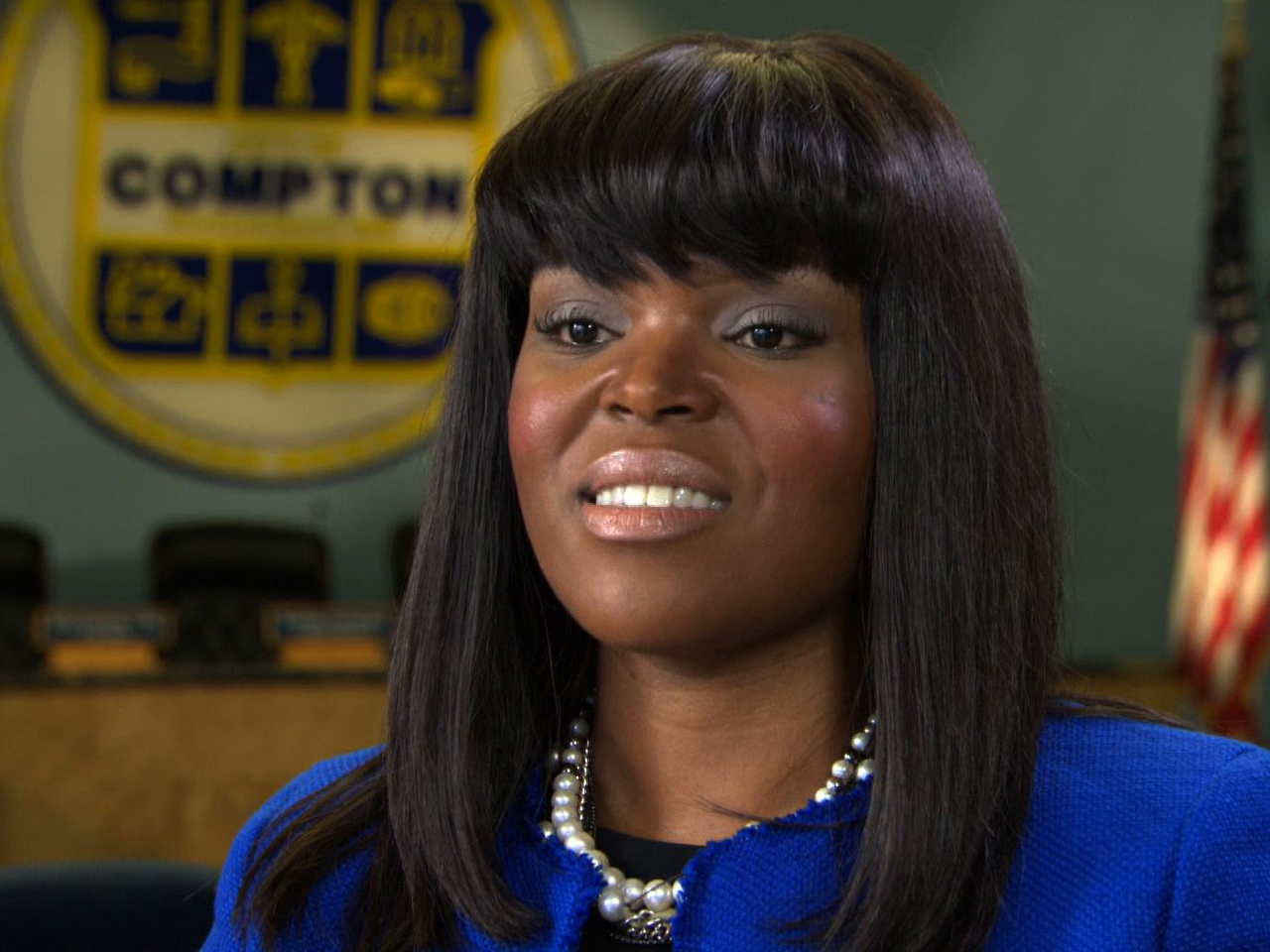 President Obama is meeting with the U.S. Conference of Mayors on Thursday. Among them: one new leader gaining national attention. Mayor Aja Brown is on a mission to rid Compton, Calif., of its reputation for gangs and violence.

Spend time with the mayor of Compton, Calif. -- the handshakes and hugs, the pictures and praise -- it's obvious the 31-year-old Brown loves interacting with people, and is passionate about public service.

Brown said, "That title, to me, just means the biggest servant."

Less obvious: this immaculately groomed, urban planner is a fighter. Brown said, "I dedicated my career to really working in under-served communities and really just being in the trenches."

She faces tough battles in Compton: high crime, high poverty and poor schools.  But the biggest, she says, is fighting the city's notorious image, immortalized by hometown rappers from NWA in the '80s to Kendrick Lamar today.

CBS News Bill Whitaker remarked to Brown, "Most people think of Compton as a place of gangs and drugs and guns and prostitution."

Brown said, "Compton definitely has pieces of that."

A big piece is crime. This city of 97,000 has one of the highest murder rates in the state.

Whitaker said, "So, it's not just an image problem -- you have a problem."

"Definitely, safety is an issue," Brown said. "But we are definitely addressing those issues as a community, I think, for the first time in a very long time."

For Mayor Brown, Compton's crime is personal. Brown said, "My grandmother was a victim of a home invasion, and someone broke into her home and raped and murdered her."

Her family fled Compton. Brown grew up miles away near Pasadena.

Whitaker said, "But yet you chose to come back to a place that had so much personal pain for your family.  Why?"

Brown replied, "I think Compton is definitely a part of my, my family history - a part of me. Why not go back to a place that I believe, you know, really had -- a great need, a city that just really needs some hope."

To many in Compton, first-time Mayor Brown represents hope. She ran against a former mayor who'd been convicted for corruption. She won in a landslide. She inherited a city that was demoralized -- a budget that was busted.

Asked about the huge budget deficit and what she has done about that, Brown said, "We have put in some great financial controls, so for the first time in over six years Compton has a balanced budget.  We actually have a budget surplus."

Compton had a deficit of places to buy fresh produce.  Mayor Brown started a farmers' market. She said of the market, "It's kind of just bringing healthy food back to the community."

She's working to attract new businesses, to reconnect law enforcement with the community.  The crime rate is inching down.

Lt. Val Rosario, of Los Angeles County Sheriff's Department, said, "I was really impressed by the energy that she has and the vision that she has. And the desire to make this city better."

Brown said, "The only difference between Compton and other cities is the ZIP Code, you know, and the mindset -- it's just really about challenging people to take ownership of our community."

She points to a revitalized Brooklyn, N.Y., as a model for Compton. Brown said, "It's almost hip to, you know, be from Brooklyn or to live in Brooklyn."

Brown said with a laugh, "Absolutely."