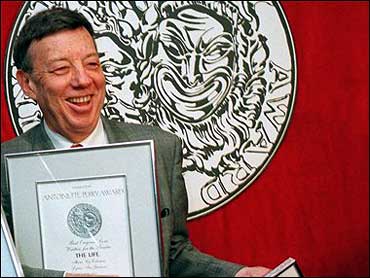 Cy Coleman, composer of the Broadway musicals "Sweet Charity" and "City of Angels" as well as such pop standards as "Witchcraft" and "The Best Is Yet to Come," has died of heart failure. He was 75.

Coleman died Thursday night after attending the opening night performance and party for Michael Frayn's "Democracy" on Broadway. He left the party and went to New York Hospital where he collapsed and died, John Barlow, a spokesman for Coleman, said
Friday.

"It's a big loss," said Emanuel Azenberg, a longtime friend and producer of a revival of Coleman's "Little Me."

"He was one of the last of the giants," Azenberg said.

"We lost a good one," said Barry Weissler, who will produce a revival of "Sweet Charity" on Broadway next April. "The great composers are always unique and take us on a journey. Their music sticks to the soul, and Cy was a real Broadway writer."

"He was the consummate musician -- from jazz to Broadway to classical -- and the youngest spirit, I've ever known, aside from my husband, Adolph Green, who, of course, was his longtime collaborator," said actress Phyllis Newman, Green's widow.

Coleman, an accomplished jazz pianist, was known for his rhythmic, up-tempo style. His pop songs, which also included "Firefly" and "I'm Gonna Laugh You Right Out of My Life," were recorded by such singers as Tony Bennett, Peggy Lee and Nat "King" Cole.

In 1960, he composed his first full score, "Wildcat," with lyricist Carolyn Leigh. The show, which was a vehicle for Lucille Ball, contained the hit song "Hey Look Me Over."

The two then collaborated on "Little Me" (1962), starring television comedian Sid Caesar, playing seven roles. The show, adapted by Neil Simon from the Patrick Dennis novel, contained such songs as "I've Got Your Number" and "Real Live Girl."

Coleman worked again with Simon on his third Broadway musical, "Sweet Charity" (1966), based on Federico Fellini's film, "Nights of Cabiria." Gwen Verdon starred in the show as taxi dancer Charity Hope Valentine. With lyrics by Dorothy Fields, the musical was later made into a film starring Shirley MacLaine.

Fields and Coleman also collaborated on "Seesaw" (1973), starring Michele Lee, Ken Howard and Tommy Tune. The musical was based on William Gibson's play, "Two for the Seesaw."

"I Love My Wife" (1977), a tale of wife-swapping, was his next Broadway musical. Although dismissed by some critics, it ran for nearly two years.

For "On the Twentieth Century" (1978), a score he wrote with Betty Comden and Green, Coleman received his first Tony Award -- one of three for best score. Based on the classic farce by Ben Hecht and Charles MacArthur, it featured John Cullum as an egomaniacal producer and Madeline Kahn as his tempestuous star.

He followed that with the music for "Barnum" (1980), based on the life of circus great Phineas T. Barnum, starring Jim Dale.

In 1989, Coleman composed the jazz-flecked music for "City of Angels," which many consider his best score. It won his second best-score Tony. A detective film-noir spoof, with lyrics by David Zippel, "City of Angels," also received the Tony Award for best musical in 1990.

The following year, Coleman (along with Comden and Green) received another best-score Tony, this time for "The Will Rogers Follies," a lavish look at the famous Oklahoma rope-spinner and storyteller, starring Keith Carradine.

Among his other Broadway musicals were the short-lived "Welcome to the Club" (1989) and "The Life" (1997), a tale of New York hookers. It was his last Broadway show.

Coleman also wrote two other musicals: "Like Jazz," which was done at the Mark Taper Forum in Los Angeles in the 2003-2004 season; and "The Great Ostrovsky," which premiered at the Prince Musical Theatre in Philadelphia earlier this year.

He wrote film scores for such movies as "Father Goose," "The Art of Love," "The Heartbreak Kid," "Garbo Talks" and "Family Business." He also won three Emmys, two Grammy Awards and he received an Academy Award nomination for the film version of
"Sweet Charity."

At the time of his death, Coleman was working on several projects, including a musical version of "Pamela's First Musical," based on Wendy Wasserstein's children's book.

Coleman was born Seymour Kaufman, June 14, 1929, in New York. He was a classically trained child prodigy who made his Carnegie Hall debut at the age of 7. By the time Coleman was in his teens, he was playing in society cafes and later formed his own jazz trio while starting to write songs.

Coleman is survived by his wife, Shelby, and daughter, Lily Cye, and two sisters.

Funeral arrangements were incomplete, although the lights of Broadway theaters were to be dimmed Friday before the 8 p.m. curtain in honor of Coleman.