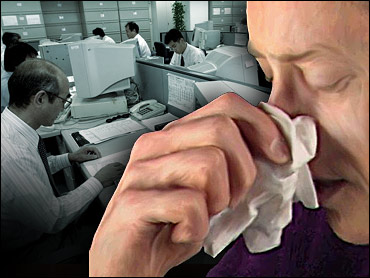 Most U.S. companies haven't planned for how to stay in business during a flu pandemic, or even if they'll follow federal advice that potentially contagious employees should stay home, a survey suggests.

Public health specialists and the government are pressuring businesses to prepare for a worldwide outbreak of the bird flu or some other super-strain of influenza, a crisis that could bankrupt many companies if their workers are too sick or scared to show up and their supply chains disappear.

The concern isn't just because of economics, but because many companies provide products and services that people literally can't live without, explained Michael Osterholm of the University of Minnesota, who advises the government.

"Automobiles, jewelry and electronics will not be big ticket items" during the next flu pandemic, Osterholm notes. "We still have to feed people. How do we assure we have heat, fuel oil, electricity?"

In the new survey of some of the nation's largest businesses, two-thirds said their companies were inadequately prepared to protect themselves during a pandemic. Demonstrating a surprising fatalism, 39 percent believed there wasn't much they could do.

The results also raise public health concerns. When asked if they would waive sick-leave restrictions to encourage workers with flu symptoms to stay home, 63 percent of the companies were undecided and 10 percent said they would not.

That contradicts the federal government's stance that having the potentially contagious stay home from work or school could prove key to stemming a pandemic.

"Corporate America is like everybody — they read it and see it on television but they really can't completely digest it," former Health and Human Services Secretary Tommy Thompson said of the pandemic threat.

His new industry think tank, part of Deloitte & Touche USA, sponsored the survey, to be released Friday at a closed-door meeting bringing about 25 corporations together with health specialists.

Next week, the government will release a checklist of pandemic preparations companies should take.

Among them: "That people have contingency plans that could accommodate between 10 and 20 percent of their work force being out at any given time for as much as two to four weeks," HHS Secretary Mike Leavitt told The Associated Press.

Some businesses do have major preparations under way.

In two weeks, Microsoft Corp. will roll out the first phase of its pandemic plan: an educational campaign for its 63,000 workers worldwide, along with bottles of hand sanitizers as a reminder that good hygiene helps prevent influenza.

Companywide telecommuting — like the software company already does when snow shuts down its Seattle-area headquarters — and plans to distribute protective masks also are part of the effort, which company spokesman Lou Gellos says follows U.S. government and World Health Organization recommendations.

Preparations are much more complex when options like telecommuting aren't possible.

"Can you tell somebody, 'I'm sorry, you've got to come in here, we don't care that your family's sick?' Can we really do that? No," said Mike Maxwell, vice president of emergency preparedness for Pepco Holdings Inc., the utility that supplies electricity to almost 2 million people in the nation's capital and nearby states.

A certain number of workers are vital to keep power flowing and restore outages, including those that occur in quarantined areas. The utility has some masks and other protective gear, and a pandemic drill planned for January will help define further preparations, said Maxwell, who also is working to ensure the government provides stockpiled vaccines and other pandemic supplies to utility workers who need them.

A pandemic "would be a cascading crisis for us as an organization," Maxwell said. "The more we do upfront, the better off we are."

HHS' Leavitt will stress next week that companies can learn from the months of disruption caused by the last century's three flu pandemics, including the 1918 flu that killed about 50 million people worldwide, 500,000 in the U.S. alone.

Plan as if a blizzard were coming, Thompson and Osterholm will advise Friday — a blizzard that could last up to 18 months instead of a few days.