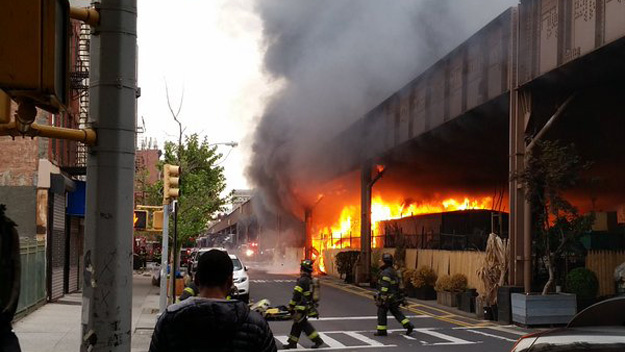 Two construction trailers that housed the Urban Garden Center caught fire under the Metro-North tracks at 119th Street and Park Avenue around 6:45 p.m., according to the FDNY.

FDNY Chief of Department James Leonard said in a news conference that several buildings on both sides of the tracks were evacuated and at least 10 vehicles were damaged. As of 10 p.m., firefighters were still extinguishing hot spots.

Late Tuesday night, engineers determined the fire had damaged the elevated trestle and that the steel would need to be reinforced.

Service into and out of Grand Central Terminal was suspended on all three Metro-North lines -- Harlem, Hudson and New Haven -- due to the fire, according to the Metropolitan Transportation Authority.

It was unclear late Tuesday when Metro-North service would be fully restored. The MTA tweeted that service was suspended from Grand Central for the remainder of Tuesday and that Wednesday's trains were expected to run on a Saturday schedule.

Photos from the scene of the fire show bright orange flames raging under the tracks, and smoke engulfing the entire trestle.

"I opened my window to climb down on my fire escape, and the smoke started getting more heavier," East Harlem resident Antone Rosas told CBS New York.

The cause of the fire was under investigation. One witness told CBS New York he believed it started on the train trestle.

"I saw the sparks, and I don't know if it was train sparks, or just something dropping below, but after the sparks, there was a loud explosion," Tom Jones told the station.

Instagram video showed a train going right through the smoke as the fire raged.

FNDY Chief Leonard said there were explosions when the fire broke out. He said there was propane in the garden center, and some bolts popped out of the steel.

Fire crews were able to keep the fire as much under control as possible, Leonard said.

"They got in there, they contained the fire to this one area," Leonard said. "Hopefully, we contained the damage, and we can get the people back on the railroad."

Leonard said there were people in the garden center when the fire broke out, but the FDNY spoke to the owner and he said all employees were accounted for.

One firefighter was injured when he tripped and fell while fighting the blaze, Leonard said.