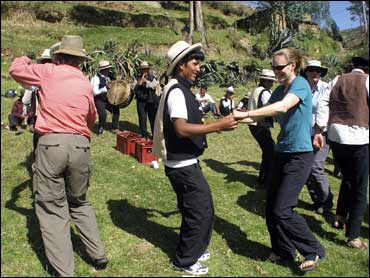 Far from the lines of tourists that snake around the entrance of Machu Picchu, hundreds deep before dawn, is Fausta Colonia's open-air kitchen.

"Manana van a estar," Colonia says in her singsong Andean Spanish, meaning "tomorrow they'll be done." She points at the three giant green squashes slowly cooking in her domed mud oven. Their skins are beginning to crack, letting out sweet bursts of aroma into the cold mountain air.

As travel to the Andean nation booms, here in the bucolic highland village of Vicos, an increasing number of intrepid travelers, eager to get away from the tour bus circuit of Peru's top tourist destinations are participating in so-called community-based tourism.

Travelers pay to stay in villagers' homes, eat what they eat, live as they live, learning about their customs firsthand.

"One noteworthy trend we have noticed in the past three to four years is that the American traveler has become more interested in 'doing' rather than merely 'seeing' historic sites or looking out of a motor coach," Robert Whitley, president of the United States Tour Operators Association, told The Associated Press.

Foreign entries into Peru nearly doubled from 2002 and 2007 and visits to Machu Picchu have increased more than 100 percent to 800,000 people over the last 10 years.

But as Peru becomes a prime tourist destination, helped in part by the rising cost of travel to Europe, some tourists are looking for something off the beaten track.

Seattle-based nonprofit travel agency Crooked Trails offers tours to Vicos as well as Peru's top tourist destination, Machu Picchu, for $2,625 without airfare. Travelers are expected do to some light farm work, a small price to pay for waking up to a view of the snowcapped Andes.

Crooked Trails co-founder Christine Mackay says the homestay generates about $265 per traveler for the family, a large sum that helps the village pay for school supplies, cultural events and other development projects.

Vicos is located in the Peru's Ancash region, the mountainous department north of Lima, some 11,000 feet above sea level. It is a farming village of 5,000 people at the foot of Peru's Cordillera Blanca, or "White Mountain Range," the largest tropical glacier chain in the world.

In the late 1990s, a group of enterprising villagers founded a community tourism project to promote sustainable tourism in the popular trekking area, while sharing their customs with travelers.

"We're setting an example," said Julio Evaristo, 42, Colonia's husband. He wears a black, wool fedora as he kneads dough for fresh bread. The visitors "see how we work, how we value our traditional clothing. That's how we retain it."

Crooked Trails teamed up with the Vicos villagers in 2002, and a year later, 10 people traveled with the agency to Peru, which jumped to 71 people in 2008, making the Andean nation Crooked Trails' most popular destination.

Mackay worried that Peru's tourism boom is likely to bring a wave of "irresponsible" tourism.

"I think that whenever there's a boom, tourism can be detrimental," she said. "I've seen it in so many places, like Thailand and Nepal."

Peru's "tourism market is catering to the tourists, rather than treating this as an educational opportunity," she said. "They treat it purely as economics." She sees community tourism programs as an antidote to the downside of conventional tourism.

Housing is simple, usually mud brick homes, with no heat. But Vicosinos are extremely hospitable.

Beneath the glow of a fluorescent bulb - the house's only electric light - Colonia, dressed in a full skirt of purple felt, laced with silver ribbon trim, unfolds cloths revealing the family's crops: white, yellow and purple potatoes, an Andean specialty.

Her husband, a renowned seed banks expert, and the travelers sit around the family dining room table on a wood plank held up by giant buckets as he tells us about his organic farming techniques.

Travelers trek up the winding hills paths above the valley that are dotted with pre-Inca ruins, to visit the communities' fields, learning to harvest the crops themselves beneath unparalleled views of the Andes.

Vicosinos speak the ancient language of Quechua, although host families speak Spanish, and all Crooked Trails tours include an English-speaking guide.

Colonia wakes at dawn to prepare breakfast in the frigid mountain air, sometimes in open shoes. She makes a fire easily to boil the tubers.

She says her husband sometimes spends days at a time up on top of their land to tend crops - barley, wheat and potatoes.

"I felt soft next to them," said Jon Zaslow, 57, a computer consultant from London, Ontario, who spent three days in Vicos with his wife, Nicolette, in July. "I don't work as hard, and don't think I solve problems as well as they. Their day-to-day existence resembled camping out, except you never get to go home to a warm shower, or go to the fridge for food."

Sheri Steiner, a 58-year-old media buyer from Steamboat Springs, Colo., who has traveled around the world, said that despite the differences between her dress, language and lifestyle from the family: "We're not so different.