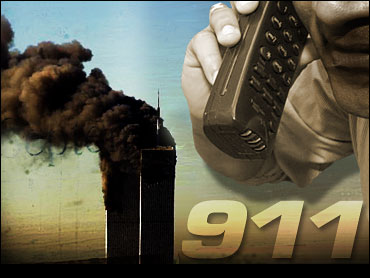 A new report by the federal commission investigating the Sept. 11 attacks found that rescuers were forced to make rapid-fire, life-and-death decisions based on poor communications, contributing to the World Trade Center death toll.

The report was issued Tuesday at the start of a hearing into the emergency response to the terrorist attacks, setting the stage for two days of dramatic testimony at the New School University, about 1½ miles from ground zero.

Scores of family members were in the audience as the commission showed footage of both hijacked planes slamming into the 110-story towers, along with videotaped testimony from survivors. As the footage showed the towers' collapse, family members held hands and locked arms as they waited for the inevitable, many of them wiping tears from their eyes.

"For me, it was reliving what my mother heard, what she saw, what her last moments were," said Terry McGovern, whose mother died in the south tower.

Committee member Sam Casperson, in a minute-by-minute recounting of the second plane's crash into the World Trade Center, detailed how Port Authority workers were advised to wait for assistance on the 64th floor – and many of them died when the tower collapsed.

Communications breakdowns also prevented announcements to evacuate from reaching civilians in the building, Casperson said. One survivor of the attacks recounted calling 911 from the 44th floor of the south tower, only to be placed on hold twice.

Emergency 911 operators had a "lack of awareness" about what was happening at the twin towers, and were overwhelmed by the sheer volume of calls, Casperson said.

Tuesday's hearings represented a shift of emphasis for the commission, which has focused on intelligence and domestic security preparedness going back months or even years before the attacks, reports CBSNews.com's Jarrett Murphy.

"On the morning of September 11 the last best hope of the people in the World Trade Center lay not with national policy," but with firefighters and police officers who responded to the disaster, said commission staff director Philip Zelikow.

But like national policy, the local emergency response had its roots in past experience – particularly the 1993 World Trade Center bombing, which killed six people and exposed major flaws in emergency response plans for the twin towers. Stairways went black and public address systems failed. Firefighters' radios lost their signal. It took ten hours to evacuate the towers in the 1993 attacks, the commission said.

"People who evacuated both in 1993 and 2001 say they were better prepared in 2001," the commission staff reported. However, despite the effort to train civilians, neither full nor even partial evacuation drills were held.

Crucially, the staff reported, "Civilians were never instructed not to evacuate up." They were not told they needed a key to reach the roof, from which helicopter rescue would be difficult anyway.

"The Port Authority acknowledged that it had no protocol for rescuing people trapped above a fire," the staff found.

Alan Reiss, who headed the Port Authority's World Trade Department, acknowledged that some workers may have headed to the rood with a "false sense of security" because of anecdotes about roof rescues in 1993.

Most distressing for the family members attending the hearing, the commission reported that workers in the north tower of the trade center – the first one hit – who called 911 were usually told to stay where they were and await instructions from emergency workers.

"The protocol to stay where they were was one of the lessons learned from the 1993 bombing," the commission staff reported, because evacuations can create new problems for civilians and can hamper emergency workers.

After the north tower was hit, workers in the south tower were instructed not to evacuate. Some who started to evacuate on their own were told to go back to their offices.

"We do not know the reason for this advice," staff member John Farmer said, "in part because the deputy fire safety director for the south tower perished in the attack."

Workers calling the Port Authority police desks in the towers got conflicting advice. Emergency 911 operators did not know where the planes had struck, and so couldn't tell people whether they were above or below the fire.

Those were only a few of the widespread communication problems found by the investigation. Firefighters used different radio channels. Public address systems and intercoms failed.

There was particular confusion over warnings that the towers might collapse. For example, one worker called 911 to report that, "90-something floor was collapsing." But the 911 operator misreported that warning to the police, and the NYPD dispatcher also erred in reporting it to police at the scene. The message police eventually received was "106th floor is crumbling."

After the south tower collapsed, firefighters in the north tower were told to evacuate, but many did not hear the order because the radio channel they were using was overwhelmed, because they were on a different channel, or because they were off-duty rescuers who had responded without their radios.

Others ignored the order to assist handicapped and injured workers to leave.

"Many perished," the report said.

Other firefighters heard the order to evacuate, but were not aware of the degree of danger.

"Firefighters who received these orders lacked a uniform sense of urgency in evacuation," perhaps because the evacuation order did not mention that the south tower had collapsed.

The commission reported that the communication problems were compounded by a lack of clear lines of authority, partly due to a "longstanding rivalry between the NYPD and FDNY."

Members of the panel worried that ambiguity has persisted over who is in charge at emergency scenes in New York City, still a likely target for another terrorist strike.

Commission vice chairman Lee Hamilton called the current NYC plan, in which the fire and police departments are assigned command for different types emergencies, a "prescription for confusion."