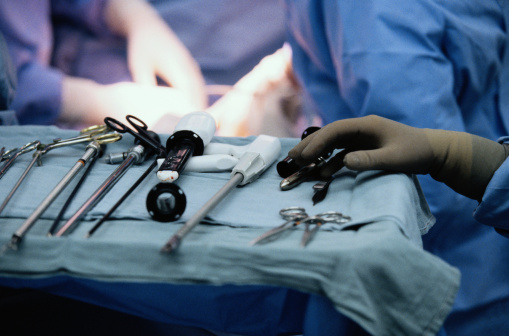 Removing the uterus with a minimally invasive procedure known as morcellation carries a risk of spreading undetected cancer, and now a new study pinpoints the likelihood more clearly.

Twenty-seven of every 10,000 women who had the technique had undetected uterine cancer at the time of the procedure, researchers found, with the odds being highest for patients over the age of 65.

Surgeons performing a hysterectomy with morcellation use a power cutter to slice uterine tissue into smaller fragments, and then remove those fragments through small incisions in the abdomen via a tube or laparoscope.

"With this procedure, you are breaking up the uterus," said study researcher Dr. Jason Wright, chief of gynecologic oncology at the Columbia University College of Physicians and Surgeons in New York City.

"You are essentially cutting through a cancer [if it is present] and that could theoretically spread the cancer to outside the uterus," he explained.

That risk is not present when the uterus is removed intact, as in a conventional hysterectomy, he said.

For the new study, published online July 22 in the Journal of the American Medical Association, Wright evaluated insurance data from more than 500 hospitals. Previous research, he said, centered on reports from single hospitals, which estimated the risk at 9 to 100 of every 10,000 women who underwent the procedure.

In April, the U.S. Food and Drug Administration issued a safety alert, discouraging use of power morcellation for removal of the uterus or uterine fibroids (noncancerous growths that can cause bleeding between periods or pain) because of the cancer risk.

Other options are available that don't involve morcellation, according to the FDA. It is continuing to study the procedure.

About 500,000 hysterectomies are done annually in the United States for such problems as uterine cancer and fibroids, according to the U.S. Centers for Disease Control and Prevention.

Wright identified more than 230,000 women who underwent minimally invasive hysterectomy from 2006 through 2012. Of those, about 36,000 women had the morcellation technique. Among these, 99 cases of uterine cancer were found. That translates to about 27 women in every 10,000.

The older the woman, the more likely she was to have underlying cancer, the study found. While six women under age 40 had uterine cancer detected after morcellation, 24 women aged 65 and older did -- an increase of about 36 percent.

While the risk of morcellation has been known, the new study offers valuable new information about older women being most at risk, said Dr. Michael Strongin, chief of gynecologic surgery at Lenox Hill Hospital in New York City.

"I think the important take-home is, the older the patient who is undergoing a procedure like power morcellation, the greater the potential for finding unsuspected malignancies," said Strongin, who was not involved in the study. "Consequently, that should be a tremendous factor in physicians deciding whether it is appropriate to use that particular technique."

Women need to discuss the pros and cons of the procedure with their doctor, Wright said.

Weighing the risks and benefits is important, Strongin said. "[The study] shows the relative risk for women under 40 is very much different than for women who are over 65."

Did I get the polio vaccine? How to know if you're protected against the virus
Thanks for reading CBS NEWS.
Create your free account or log in
for more features.
View CBS News In
CBS News App Open
Chrome Safari Continue
Be the first to know
Get browser notifications for breaking news, live events, and exclusive reporting.