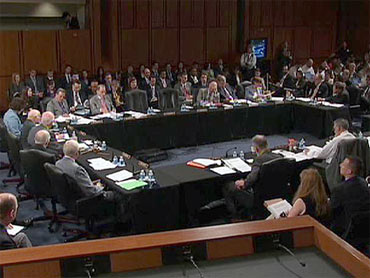 The Senate Judiciary Committee today approved Solicitor General Elena Kagan's nomination to the Supreme Court, but nearly every Republican on the committee opposed her nomination, saying her personal and political views inappropriately drive her legal views.

Just one Republican joined the Democrats in voting in favor of Kagan's nomination: Sen. Lindsey Graham of South Carolina. The final committee vote was 13 to six. Kagan's nomination now goes before the full Senate for consideration; Graham's vote ensures that Democrats will have the 60 votes necessary to overcome a potential Republican filibuster of the nomination.

Graham said he would clearly prefer a more conservative nominee, but that he has a constitutional obligation to honor President Obama's choice, so long as she is qualified.

"I could give you 100 reasons on why I could vote 'no.' No one spent more time trying to beat President Obama than I did, except maybe Sen. McCain," Graham said. "But I understood we lost."

Mr. Obama said in a statement that today's vote in favor of Kagan "is a bipartisan affirmation of her strong performance during her confirmation hearings."

"Elena Kagan is one of this country's leading legal minds, and has shown throughout this process that, if confirmed, she would be a fair and impartial Supreme Court Justice who understands how decisions made by the Court affect the lives of everyday Americans," the president said.

"Much of what she's done has been defined by her involvement in politics," said Sen. Jeff Sessions (Ala.), the top Republican on the committee.

A judge "must set their politics aside when they put on the robe," Sessions said, adding that he is not convinced Kagan would do so.

Sessions added on CBSNews.com's "Washington Unplugged" today that Kagan's career indicates she has some "serious judgmental flaws and errors" that are "quite significant."

"There's no question Elena Kagan is eminently qualified" to join the Supreme Court, Sen. Dianne Feinstein (D-Calif.) said. Like other Democrats, Feinstein praised Kagan for her inclination to reach out to others with different views, as she did as dean of Harvard Law School when she hired a number of conservative faculty members.

"I, for one, have very high hopes for the philosophy of moderation and restraint that a Justice Kagan could bring to the court," Feinstein said.

Feinstein said Kagan's "credentials place her squarely among our nation's top legal minds" and that her reasoning, composure and humor were all apparent during her confirmation hearings.

Along with citing Kagan's personal political views, Republicans also complained that Kagan revealed little to the committee about how she would serve as a judge. Republican Sen. Jon Kyl (Ariz.) criticized Kagan of being "disingenuous" in her testimony.

Added Sen. Charles Grassley (R-Iowa), "She failed to answer many of the questions posed to her... I worry that if confirmed her deep set personal beliefs will cause her to overturn precedent."

Democratic Sen. Herb Kohl (Wisc.) also complained "the substance of her answers were so general at times it would be difficult to distinguish her answers from any other nominee." He said, however, that Kagan's vague answers speak to problems inherent in the confirmation hearing process, not to problems with Kagan's nomination.

Kagan, he said, is "unquestionably qualified."

"I believe her judicial philosophy is in the mainstream of our country's thought," he said.