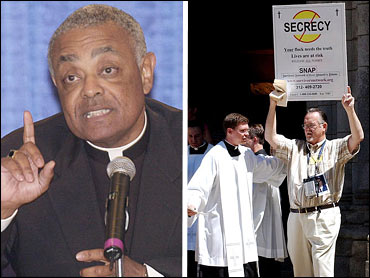 America's Roman Catholic bishops face a critical six months ahead in which a series of reports will either support their claim that sex abuse reforms are on track or provide ammunition to their increasingly vocal critics.

"The bishops are more hopeful. I think we feel more confident. I think we're beginning to get a handle on it," Bishop Wilton Gregory, president of the U.S. Conference of Catholic Bishops, said in a weekend interview as the group's semiannual meeting adjourned.

Across town, however, members of a clergy abuse victims' group attending their own national conference said they doubted the bishops' claims.

More than two dozen members the Survivors Network of those Abused by Priests took to the microphone during the meeting to describe their own ordeals and the betrayal they felt in the church's response.

The bishops' future credibility in the eyes of the U.S. laity - 66.4 million strong - will depend heavily on the National Review Board, an independent monitoring panel of prominent lay Catholics, and two investigations the board is supervising: a statistical survey of abuse cases and an audit of how each U.S. diocese is complying with reform policies.

The board plans to issue a progress report to the Catholic population after its next meeting, July 28-29 in Chicago.

Around the end of the year, the board also will produce a major document on the causes of the sex abuse crisis that has roiled the church for the past year and a half.

The crisis began last year with evidence that church leaders in Boston had shuffled abusive priests from parish to parish rather than remove them. Since then, at least 325 U.S. priests have resigned or been dismissed from their duties.

The bishops' image was shaken further last week when former Oklahoma Gov. Frank Keating resigned as the review board's chairman amid strong criticism over his remarks comparing some church leaders to the Mafia.

One dispute that precipitated Keating's remarks - the participation of some dioceses in the survey - has since been resolved, the bishops said. Gregory, bishop of Belleville, Ill., insisted in an interview that his colleagues are all ready to participate.

"Are the bishops on board? Yes. Are they proceeding? Yes. With sincere commitment? Yes," he said.

The board's upcoming reports will rely on the bishops' cooperation and self-reporting, which has some skeptics concerned.

"If bishops don't share information with their lay people, journalists, civil lawyers, grand juries and prosecutors - and some or many don't - how can we hope they will share it with a stranger sent by the National Review Board?" said SNAP's national director, David Clohessy.

During SNAP's national meeting, the 200 delegates created their own platform that, among other things, tells victims to "insist on full public disclosure by church officials" and urges bishops to meet with abuse victims.

On Sunday, members of SNAP held signs and posters of children's faces and marched outside the Archdiocese of St. Louis' Cathedral Basilica, handing leaflets to parishioners leaving Mass.

The message: They can no longer wait for bishops to do the right thing. They support each other and invite other victims to join them and find healing.

"My faith is in God, not the men in leadership," said Barbara Blaine, 46, of Chicago, the founder of SNAP. "We are being church to one another. We're doing what the bishops should have done."

A year ago, the national bishops' conference spoke of ongoing dialogue with victims. But since then, SNAP and The Linkup, another national victims' group, have had no meetings with Gregory or with the hierarchy's special committee on abuse, headed by Archbishop Harry Flynn of St. Paul and Minneapolis. Flynn and Gregory said contacts are now most appropriate between individual bishops and victims on the local level.

The hierarchy's special committee on abuse also has future business: deciding what to do with abusers who remain priests but are barred from active ministry, and working with the independent men's religious orders on applying reforms.

Yet another project stemming from the abuse crisis is a Vatican-sponsored investigation of U.S. seminaries. Gregory said details are being worked out with the Vatican and on-site visits should start within a year.

The abuse crisis has compounded major underlying problems in the church, and some U.S. bishops want them discussed at an extraordinary national or "plenary" council, the first since 1884. The bishops will decide a year from now whether to proceed.

The bishops spent all day Friday in closed door sessions discussing the council idea and what such a meeting should address.

During the meetings, Cardinal Francis George of Chicago presented a paper on the role of the Catholic laity, but did not release his text. Pittsburgh's Bishop Donald Wuerl also offered a bleak survey of American Catholics' "religious illiteracy" amid an "aggressively secular" culture.

As Flynn warned his colleagues Saturday, "There is still a long road ahead of us."