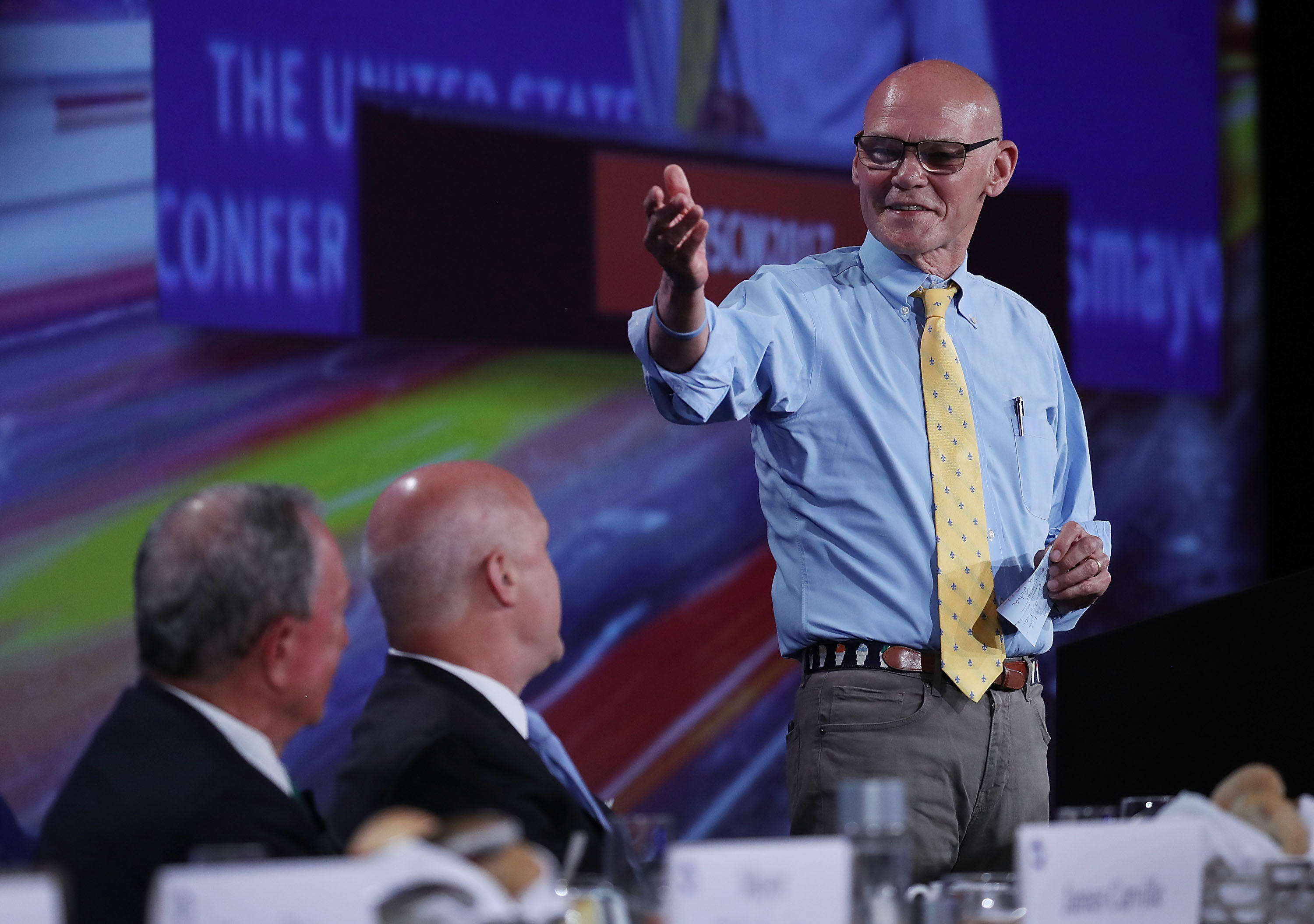 Could Democrat James Carville save the GOP?

When Bill Clinton challenged incumbent Republican President George H. W. Bush, Carville coined the phrase "It's the economy, stupid" as a reminder to his own candidate and campaign to keep the focus on the one issue that, he believed, could win the White House. Carville was right.

Today, Republicans are hoping that same mantra can help them survive the midterm elections in November, and enable them to maintain control of the House of Representatives. The odds are long, but the GOP does have good economic news to tout.  The question is whether the economy alone is enough.

First the good news for the GOP: The U.S. economy grew 4.1 percent in the second quarter, and the average quarterly GDP growth under Trump so far is almost 3 percent (2.9 to be exact).  Before the 2016 election, some economists on the Left were openly dismissive of the idea the U.S. economy could sustain 3 percent annual growth. If these numbers hold, Trump and this GOP allies will be able to say they proved their opponents wrong yet again.

But GDP growth is an abstraction. What people actually feel are jobs and "job security"—are they afraid of losing their job in the near future? And here, it could be argued, Republicans have an even better argument.  Not only is unemployment down to 4 percent, but most Americans believe the U.S. economy is improving. In fact, the job market is so hot that, for the first time ever recorded, there are more job openings than unemployed workers to take them.

That feeling is buoyed by stories about employers dropping requirements for college degrees.  According to at least one analysis, the share of job postings requiring a college degree is falling as employers struggle to find workers to fill open jobs.  Some businesses are even hiring job seekers who fail the drug test, making drug treatment part of the employee package.  That's a job market that's growing, not shrinking.

As President Trump tweeted, "Private business investment has surged from 1.8 percent the year BEFORE I came into office to 9.4 percent this year -- that means JOBS, JOBS, JOBS!"

"If it were anybody but Donald J. Trump, the approval numbers would be astronomical," says Democratic pollster Peter D. Hart.

He's one of the pollsters who believe that Donald Trump isn't being judged by his economic results, but rather his political performance. And the data seem to back that up.

The economic news has been great for the past three months, but Trump's polls have been flat. If anything, his disapproval number in the Real Clear Politics average of polls has edged up a bit.

The new PBS/Marist poll finds that just over half of registered voters think Trump is moving the economy in a better direction—including a solid majority of independents. But a third of the country, even with the booming economy, tell economists Trump's making it worse.

Here's another interesting finding from Gallup: When you ask Americans to name the "most important thing going well," the top answer is the economy. That makes sense given the facts on the ground. But the second highest answer is civic engagement/ #TheResistance, and the third highest answer is "nothing is going well."

Nothing? In this economy? How can people say that? Because no matter what he does, these die-hard Trump haters will say it's bad. They are the living embodiment of the old joke that "If Trump walked across the Potomac River, their response would be 'See—Donald Trump can't swim!'"

As Republican pollster Whit Ayers puts it: "People are not evaluating Donald Trump based on the state of the economy. They're evaluating him based on his conduct and behavior in office."

And the more they hate Trump, the harder it is for Trump's party to hold the House—particularly in a year when they have to defend 42 open seats, the most since 1930. Democrats just need 23 to put Nancy Pelosi back in the Speaker's chair (assuming her party will give her the job).

In other words, "It's the economy, stupid" won't work if the voters' response is "The economy is fine. It's Donald Trump who's stupid!"

So how can Carville's theory come to the GOP's rescue? By convincing voters this terrific economy is something they could lose.

It's easy to forget amid the "Must Get Trump" media cycle how anemic the Obama economy was. Despite the stimulus package and cash for clunkers and the rest, The economy averaged just 1.6 percent growth during Obama's term. In his last two years, the numbers were actually worse because the growth rate fell by almost 40 percent from 2015 to 2016. Trump inherited an economy that was going the wrong way, and he turned it around.

"In the first five quarters of the Trump presidency, growth has been almost 40 percent higher than the average rate during the Obama years, and per capita growth in gross domestic product has been 63 percent faster."

Plenty of Americans who aren't particularly fond of Trump remember that. It may violate their virtue signaling to admit it to a pollster, but the bad old days of the Obama doldrums weren't great for many working-class and white-collar Americans.

During the Obama "recovery," it was common for workers to go to bed at night and wonder they'd still have a job in the morning. Now it's employers who are wondering if their workers will be there in the morning, or if they'll have been lured away by better wages somewhere else. How many workers really want to flip that script back?

Remember: Not a single Democrat voted for the tax policy Republicans are touting for helping power the current economy.  Prominent Democrats like Sen. Elizabeth Warren are loudly campaigning on repealing those tax cuts and returning the Obama-era economic policies.

If Republicans can convince voters that keeping the economy moving means keeping Republicans governing, they may have a chance. If all the talk of "socialism" and far-Left progressive economics sparks fears that the Obama-era economy might return on the Democrats' watch, even Trump-averse voters might back their local Congressman—or at least stay home.

"It's the economy, stupid" might not be enough by itself to save the GOP, but adding "Don't let how you feel about Trump making you do something stupid" just might do the trick.