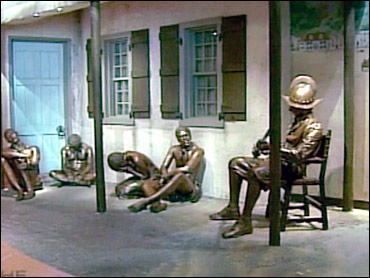 Cincinnati was a major junction on the Underground Railroad, the secret network that helped runaway slaves in this country flee north to freedom.

Monday, the National Underground Railroad Freedom Center, which preserves a difficult part of our nation's history, was officially dedicated.

Sunday night, at a gala event to celebrate the official opening of the museum, The Early Show co-anchor Harry Smith caught up with Oprah Winfrey, who donated more than $1 million to help make it a reality.

"What happened in African-American history is really of value, significance and power," she told Smith.

What is so profound about the Underground Railroad, she notes, is that it could not have happened without the different people involved.

"It wasn't just black people helping other people, because we weren't in a position to do it. So if you didn't have other people, abolitionists, who were of different races, who said, 'I believe that this is wrong,' it never could have happened," she said.

For more than three decades, the Underground Railroad moved slaves north to freedom.

Now well over 140 years later, the voices of the past are echoing through the lives of their descendants who are determined to pass on what they've learned.

Secret code quilter, Serena Strother-Wilson grew up in South Carolina hearing stories that were passed down from her slave ancestors.

"My grandmother said that during slavery time, the cook would have on these big aprons. Under here, they would have food in to give the children back in the cabins, " she says. "The ones that are quilted are like my grandma taught us."

Strother-Wilson learned about a secret quilt code, whose signs and symbols go all the way back to Africa.

"We were not permitted to do drumming or reading and writing, that kind of communication," she explains. "So we were forced to use what we had such as songs and the quilts."

When the quilts Strother-Wilson's ancestors made on plantations were hung outside to air out, in plain view, their patterns were actually a warning for some to get ready for the long journey to freedom.

Each quilt pattern told a different part of the Underground Railroad story.

Even the number of knots tied had special meaning.

She explains, "If it was tied with three knots then it would be March that the big escape was going to take place."

Escaping slaves sought refuge in safe houses owned by people like the Quakers Levi Coffin and his wife, Catherine.

"I have dreamed of standing in the place where my ancestors stood," Seron says, "They were engaged in with saving people's lives and doing great things for these fugitive slaves."

In an upstairs bedroom, a small door reveals a secret hiding place for slaves Levi Coffin and his wife helped along the Underground Railroad.

Seron says, "He became a very central place to the Underground Railroad. There were three roads that came from the south to his house that directly led fugitive slaves to him."

An enclosed well helped the Coffin's disguise the amount of water used by hidden slaves and secret wagon compartments concealed slaves under bags of grain on their way to the next safe house.

Now to commemorate the opening of the Freedom Center, Seron and Strother-Wilson are traveling the Underground Railroad again - this time to pay their respects, digging dirt to take to the Freedom Center ceremony.

Strother-Wilson says, "I'm going to take a bag of soil from the Underground Railroad house here in Columbus, Ohio to Cincinnati, Ohio and I'm going to commemorate the crossing of that river we call 'the river Jordan' in our quilt code, really rejoicing that this day has come."

Both women are getting together again next month at a conference on women's rights to continue their journey together, speaking about their shared past as abolitionist and slave.

Visit the museum. For tickets and information Click here.