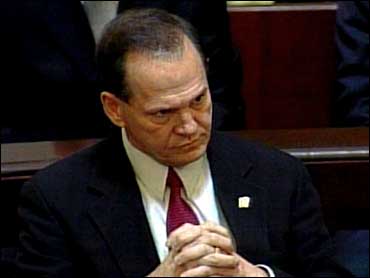 Alabama Chief Justice Roy Moore was removed from office Thursday for refusing to obey a federal court order to move his Ten Commandments monument from the rotunda of the state courthouse.

The state Court of the Judiciary unanimously imposed the harshest penalty possible after a one-day trial in which Moore said his refusal was a moral and lawful acknowledgment of God. Prosecutors said Moore's defiance, left unchecked, would harm the judicial system.

Moore, a champion of religious conservatives, had been suspended since August but was allowed to collect his $170,000 annual salary. He was halfway through his six-year term.

Speaking immediately after the decision, a defiant Moore told supporters he had only acknowledged God as is done in other official procedures and documents.

"I have absolutely no regrets. I have done what I was sworn to do," he said, drawing applause.

He said he would consult with religious and political leaders before deciding what to do next. He could appeal to the Alabama Supreme Court.

Under Thursday's decision, the governor will appoint someone to serve the rest of Moore's term, which expires in 2006.

Presiding Judge William Thompson said the nine-member court had no choice in its decision after Moore willfully and publicly ignored the federal court order. "The chief justice placed himself above the law," Thompson said.

A federal judge had ruled the monument was an unconstitutional promotion of religion by the government. A federal appeals court upheld the ruling, and the U.S. Supreme Court refused to hear Moore's appeal. The monument eventually was rolled to a storage room on instructions from the eight associate justices.

The ad hoc Court of the Judiciary heard the case after a complaints filed by the Judicial Inquiry Commission.

Greg Sealy, head of the Sitting at His Feet Fellowship in Montgomery, an inner-city mission, said it was the "darkest day" he has seen in America since he moved to the United States from Barbados 23 years ago.

The chief justice testified he was fulfilling his duties and promises to voters when he refused to follow the court order.

Moore, 56, testified that he followed his conscience and did nothing to violate judicial ethics.

"To acknowledge God cannot be a violation of the Canons of Ethics. Without God there can be no ethics," Moore testified.

He had also reiterated his stance that, given another chance to fulfill the court order, he again would refuse to do so. When one panelist, Circuit Judge J. Scott Vowell of Birmingham, asked Moore what he would do with the monument if he were returned to office, the chief justice said he had not decided, but added: "I certainly wouldn't leave it in a closet, shrouded from the public."

"What message does that send to the public, to other litigants? The message it sends is: If you don't like a court order, you don't have to follow it," he said.

It was as a circuit court judge in Gadsden in the 1990s that Moore became known as the "Ten Commandments Judge" after he was sued by the American Civil Liberties Union for opening court sessions with prayer and for displaying a hand carved Ten Commandments display behind his bench.

He said Wednesday that when he ran for chief justice in 2000, his entire campaign was based on "restoring the moral foundation of law." He added that it took him eight months to personally design the monument, which he helped move into the judicial building in the middle of the night on July 31, 2001.

Jones asked Moore why he didn't just go ahead and move the monument as Thompson ordered.

"It would have violated my conscience, violated my oath of office and violated every rule of law I had sworn to uphold," Moore said.

CBS News legal analyst Andrew Cohen says "removing a judge from office is an extraordinary thing," but so was Moore's defiance of a federal court order.

"The fact is that thousands of judges across the country every day enforce and obey laws that they don't necessarily agree with," Cohen said. "I think the panel wanted to send a message that no one, not even the chief justice of a state, can decide for himself which laws to obey and which to disobey."