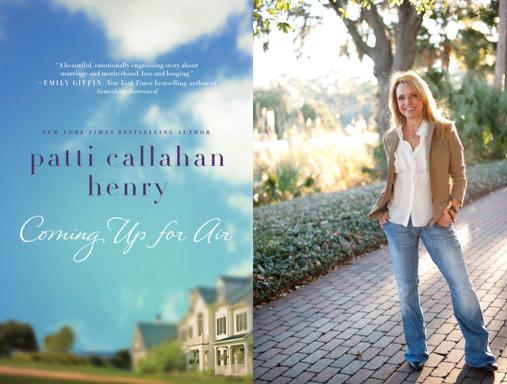 Jeff Glor: What inspired you to write the book? Patti Callahan Henry: This book "Coming Up for Air" began before I even knew it had begun. Many years ago, I was in Fairhope, Alabama on book tour when a college friend told me the story of a Jubilee. A Jubilee is a natural phenomenon that appears both mystical and magical in its beauty and unpredictability. What happens is this -- when nature's summer-mood is just right, all the fish, shrimp, crab, and sea life in the Mobile Bay come to the surface of the water. This is a sacrifice of the sea that is only partially explained by science, which states that an odd combination of wind, season, weather and tide pull all the oxygen from the bottom of the bay, causing the sea life to come up for air while possibly sacrificing their lives. Over a years time I became preoccupied with this theme - coming up for air at the possible loss of life. And the story rose from that obsession, as most of my stories rise from some preoccupation or obsession.

JG: What surprised you the most during the writing process? PCH: When I first stared writing novels twelve years ago, the thing that surprised me the most about the writing process in general was the magical synchronicity that occurred when the creative process was taken seriously and, for me, obsessively. When I began writing, "stories" and not just random thoughts, I opened a world both inside and outside that I had no idea existed, a place where words and sentences constructed a world. But, in this book - "Coming Up for Air" - the thing that surprised me the most was that I'd believed I was writing a story about the mother (Lily), but really I was writing about the daughter (Ellie). I realized this story-altering fact when I was writing a scene where the daughter plants wildflowers in her mother's cultured garden. The daughter believed that this act would please her mother, but it had the opposite outcome. The daughter's life is forever altered by this singular moment, and pleasing her mother became her primary life-goal. The story changed from that moment forward. Of course this made the writing process laborious, and many pages were put in the "save for another time" folder, but from that scene forward, the novel unfolded inside me and on the page.

JG: What else are you reading right now? PCH: I just finished "The Art of Fielding," and I didn't want it to end. Both my sons are baseball players and having grown up with three sisters, I am consistently bewildered by men's behavior surrounding sports. This book opened my eyes to that alternate universe in a fascinating and endearing story.

JG: What's next for you? PCH: An extraordinary event occurred in my family -- a lost (adopted) child was found - and our lives have been irrevocably transformed. The reunion piece of this story happened to my sister and her daughter, but events don't happen to just one person. When a reunion ensued, I - as a storyteller - became fascinated with the emotional and situational ripples that moved through many, many lives. I'm not writing a tell-all true to life story, but I am creating a novel using the beautiful notes of this event. What happens to one of us affects all of us. Family formations shift; Alliances change; hearts break and hearts heal. Capturing the essence of this soul-changing story is where I am spending all my writing time right now. This novel will be released in 2012, and is right now titled "Once Was Lost."


For more on "Coming Up for Air," visit the St. Martin's website.