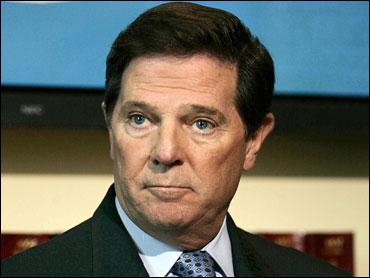 For the last two years, as he pursued the investigation that led to Wednesday's indictment of House Majority Leader Tom DeLay, Travis County, Texas prosecutor Ronnie Earle has given a film crew "extraordinary access" to make a motion picture about his work on the case.

The resulting film is called The Big Buy, made by Texas filmmakers Mark Birnbaum and Jim Schermbeck. "Raymond Chandler meets Willie Nelson on the corner of Wall Street and Pennsylvania Avenue in The Big Buy, a Texas noir political detective story that chronicles what some are calling a 'bloodless coup with corporate cash,'" reads a description of the picture on Birnbaum's website, markbirnbaum.com. The film, according to the description, "follows maverick Austin DA Ronnie Earle's investigation into what really happened when corporate money joined forces with relentless political ambitions to help swing the pivotal 2002 Texas elections, cementing Republican control from Austin to Washington DC."

"We approached him [Earle], and he offered us extraordinary access to him and, to an extent, to his staff," Birnbaum told National Review Online Thursday. "We've been shooting for about two years."

Birnbaum and Schermbeck showed a work-in-progress version of The Big Buy last month at the Dallas Video Festival. At the moment, they do not have a deal for the film to be shown anywhere else. Their last film, Larry v. Lockney, was shown on PBS, and they hope that perhaps a similar arrangement might be made for the new picture. Whoever ends up showing it, the film has so far been funded entirely by its makers. "We tried really hard to get it funded," Birnbaum says, "but we didn't get any takers."

Schermbeck told National Review Online that the film was an irresistible Texas story. "I've been pretty interested in watching Tom DeLay work," Schermbeck says. "I thought he was a fascinating guy, certainly the most powerful Texan to emerge on the national scene in some time, a kind of Republican Sam Rayburn type, with that kind of mastery of the machinery and the will to do it."

But DeLay did not cooperate with the filmmakers, and neither did a number of DeLay allies. Earle, on the other hand, did. "I had known about Ronnie Earle for a very long time," Schermbeck says. "I thought that would be an angle to approach the whole story, telling something about Tom DeLay, even though Tom DeLay wouldn't grant us an interview."

Earle "allowed us behind the scenes when the indictments came down last year, the first wave of indictments," Schermbeck says. "We got to follow him back to his home a couple of times, which I understand he doesn't allow anybody to do." Schermbeck says the film includes interviews with some critics of Earle, as well as lawyers who are representing some of the targets of the investigation.

So far, The Big Buy has received almost no attention in the press. With DeLay's indictment, and increased attention to Earle as well, that situation seems likely to change. (The filmmakers say they will be back at work next week, filming a new ending to the picture.) "We're pretty low on everybody's radar," Schermbeck says. "We kind of took a gamble three years ago. We didn't know what was going to happen. We feel like, as documentary filmmakers, we gambled and it paid off."

By Byron York. Reprinted with permission from National Review Online

Governors to decide who gets vaccines first, health secretary says

Alex Azar says Moderna and Pfizer vaccines may receive FDA approval and be ready for use before Christmas.