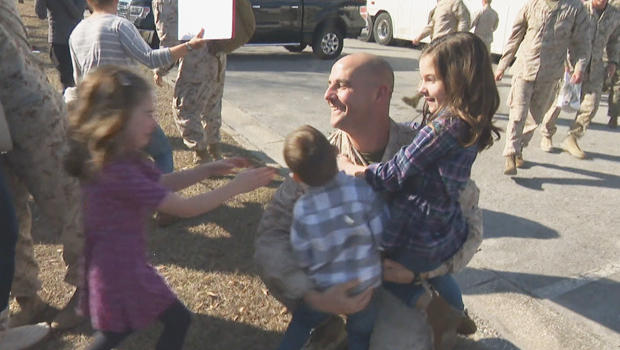 "CBS This Morning" continues to follow the lives of our nation's bravest as they return from war. We were there earlier this year when a group of Marines came home to North Carolina from Afghanistan's Helmand Province.

It's been six months since that emotional reunion. Now as part of our series, "Coming Home," we focus on the families of two Marines, Major Ethan Krumnow and Major Paul Rivera.

You hear this phrase all the time when we're honoring our nation's heroes: "Families serve, too."

But what does that really mean for a family to serve? How do they cope when this huge hole opens up in their home, and then when their loved one comes home and so much has changed – especially for those with young children?

When Majors Krumnow and Rivera first saw their families, you could feel the relief.

But after nine long months in Afghanistan, Krumnow and his wife, Christina, faced some surprises.

"On the other hand, everyone wants to hold dad's hand, they want to sit by me at the restaurant, they want to do everything with me. They're not doing it on purpose. But then mom kind of becomes like, 'Yeah, mom, we know that you've been here. Let's go back by dad.'"

"That hurts, too," said Christina. "I'm the problem solver, but he's the fun guy."

"It was difficult because it was trying to find some commonalities with them," he said. "I know they like Star Wars. They'd already been watching Star Wars on Netflix and stuff, and they were like, 'OK dad, this is what we've been watching, we're almost done!'"

While he was gone, his wife, Lily, had moved some furniture – two twin beds – to the master bedroom.

"It was one of those things where, I guess, a comfort for me, where I have all my babies in one spot," she said. "I guess that's what helped me sleep through at night."

For both families, the children are the focus.

When asked to a describe a moment that was especially hard, Christina Krumnow replied, "The girls sang for their Christmas concert and they were crying 'cause he wasn't there. And you can't console them, it's just not going to get any better."

"Did you cry?" asked Crawford.

"Actually, no, I did cry. I try not to cry, just because I am a very emotional person, and so I do want them to know it hurts. It does. It stinks. But I have to console them: 'It's OK, we've got this, we can do this. Mommy's still here.'"

For kids, the deployments can be hard to process. Lillian said that on the day her father left, "Everyone was in the car and we were crying, for a long time."

Crawford asked, "What were you thinking then?"

"He might die, since he was working so hard," said son Franklin.

The Krumnows have seen the separations take a toll on their son, where at family functions Franklin would pair up with someone, "some other dad," said Ethan. "To me that, like, confirmed that he really was missing [me]."

"Yeah. That was hard. That was really hard," Christina said.

At the Rivera house, it's much the same.

When the Riveras are separated, with Paul serving in dangerous combat zones, they rely on their faith. "I'd wake up and just go in my closet and pray for 15 minutes, and that was one thing I did every day," Lily said. "I just felt like I needed that pick up."

"Because you didn't know what the day ahead was going to be?" asked Crawford.

"Yes. And just emotionally. I mean, I'm by myself here."

Through multiple deployments, Rivera has learned to be there when he can – even surprising her on special holidays.

"It was a little scavenger hunt," he said. "So I pre-staged things throughout the house to surprise her. It was like, 'Do me a favor and I need you to go to this room and I need you to move these books out of the way. And happy anniversary!'"

Found: a Tiffany's famous blue box, with a note.

With dad now home, the Krumnows hold barbecues for family and friends to celebrate the times they do have together.

"It's really fun with him, too," said Lillian.

"Is he a fun guy?" asked Crawford.

"In some sense it brings us closer together, now that we were gone for a while. It kind of makes it more meaningful."

Both wives recognize the true meaning of sacrifice. Their needs come second.

"He doesn't particularly belong to me, he belongs to the government," said Lily Rivera. "So, he goes and does … his responsibilities, and I'm OK with that."

And that has to come first? "It does."

That's the sacrifice for those back home who serve by staying strong.

Caleb and Levi Rivera hope their dad will be able to stay a while. "I think he has to have another deployment," said Levi.

"And how will you guys get through that?" Crawford asked.

Even from those young children, one can see the mix of resolve and hope that all these families have – always ready to take on the next challenge.

A third Marine "CBS This Morning" has been following since that homecoming at Camp Lejeune, Captain Tamara Watkins, is starting on a very different story: she just drove across the country to start school in California. We'll check in on that huge adjustment down the road.