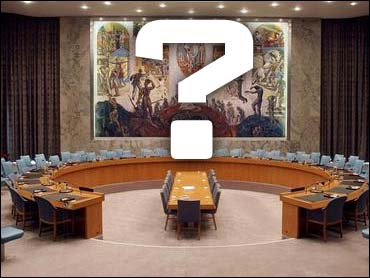 
The draft resolution the Bush administration has begun to discuss with fellow members of the United Nations Security Council has to satisfy two groups of nations, each with its own concerns about the security and reconstruction effort in post-war Iraq.

First, Washington will have to deal with the concerns of Russia and France, who have opposed Bush administration policy on Iraq and who hold veto power on the council.

As always, the French can be expected to exact a high price for their support of any new resolution. Knowing that Washington will not yield overall command of security forces in Iraq, France seems to want — along with the Germans who have a vote but not a veto — more control for the U.N. on political and economic decisions concerning the future of Iraq.

France's President Jacques Chirac signaled this in Dresden on Thursday when he appeared with Germany's Chancellor Gerhard Schroeder. Chirac said the draft resolution does not put sufficient emphasis on turning over political power to the Iraqis.

Schroeder's reaction was more to the point of what price the Europeans may try to exact. "Now is the time to look forward and that can only happen if the United Nations can take responsibility for the political process," he said.

It's unclear how much the Bush administration will be willing to give on the question of who wields political power in Iraq.

The second group of nations taking a close look at the wording of the resolution includes Turkey, Pakistan and India, each of whom Washington hopes will send thousands of troops to Iraq to help stabilize the security situation as soon as they have the political cover a U.N.-sanctioned multinational force would provide.

Inside the beltway the Bush administration is being accused of a "shift" — a nice word for a flip-flop — in policy, prompted by continuing American casualties and the increasingly high cost — now estimated as high as $60 billion — of carrying most of the burden in Iraq alone.

Administration officials, of course, deny this, with Secretary of State Colin Powell saying, "It's not related to casualties. It is related to the evolutionary process that we have always had in mind to eventually restoring sovereignty back to the Iraqi people for their own country…"

When pushed, however, some administration officials come closer to acknowledging the real reasons behind Washington's new approach at the U.N.

"It's not inconsistent with previous policy," is the way one official put it, but he conceded he "didn't know if we'd be doing this if some of the larger countries—like Turkey, Pakistan and India—had made troop contributions" — another way of saying the Bush administration's preference was not to go back to the U.N., but it couldn't get enough other countries to help without U.N. approval.

Will Washington's attempt to spread the burden be successful? It depends, says one U.N. diplomat.

"The debate about whether the U.N. should be a central—or a sideline player was never fully resolved in the run up to the war. And now we're coming full circle."

Thus the discussions over the new U.S. draft resolution will center on what mandate the Bush administration is willing to cede to the U.N.

The central question, this diplomat says, is: "Is the U.S. more open to reality this time around?"
By Charles Wolfson