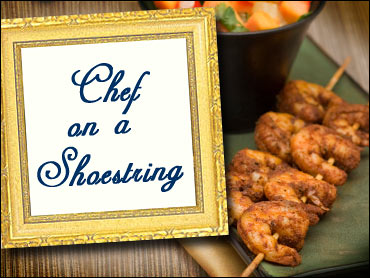 With warmer weather right around the corner Chef David Myers from Los Angeles' newest French brasserie comme Ça, is here to cook us a refreshing spring meal for four. Using light ingredients and lots of flavor Chef Myers will have everybody in the mood for spring! Chef Myers' menu includes: Chilled Pea soup with Lemon Crème Fraîche and Basil, Grilled Shrimp, Radicchio & Endive with a Citrus Vinaigrette, and Grapefruit Cream with Grapefruit and Mint.

Myers seeks three things in his kitchen: perfection, creativity and harmony. His culinary vision and commitment to cultural diversity are what make his restaurant Sona among the best and most popular culinary destinations in Los Angeles. Sona has established itself as one of the top restaurants in Los Angeles, receiving inclusion in the list of places to dine before you die from O: The Oprah Magazine and a five star rating - the only restaurant to hold this honor - from Angeleno in April 2007. In 2003, Myers was named one of the country's "Top 10 Best New Chefs" by Food & Wine magazine.

Myers began his career with intentions of studying and practicing international business. Not long after he began his studies, Myers' passion shifted to cooking. This discovery led him to Charlie Trotter's in Chicago and then overseas to Gerard Boyer's three-Michelin-starred Les Crayeres in Reimes, France, where he learned valuable French cooking techniques. Upon returning to the U.S., he continued his studies under the tutelage of Chef Daniel Boulud at Restaurant Daniel in New York City.

At Sona, he uses only the finest produce, especially from California's artisan farmers. His fluency and respect for French traditions and technique have kept his dishes exciting and allow him to draw upon multi-cultural flavors with perpetual innovation.

In 2005, Myers opened Boule Patisserie across the street from Sona. Modeled after traditional Parisian patisseries, Boule's sweets marry the delicacy of the French art with a seasonal approach to ingredients. In September 2007, Boule expanded to become Boule Atelier, their flagship retail space and production facility, which was closely followed by a new storefront in Beverly Hills.

Crème Fraîche: This is a heavy cream slightly soured with bacterial culture, but not as sour or as thick as sour cream. Its higher fat content and lower viscosity allow it several advantages over sour cream (i.e., it can be mixed with air to form whipped cream).

Radicchio: Radicchio is a mildly bitter tasting leafy vegetable. It is very popular in Italy and has gained in popularity in the U.S. in the last few years. It is eaten raw with just a bit of olive oil and salt, as well as mixed into a variety of salads. You may also see it on menus grilled or roasted or combined into other dishes such as risotto.

Endive: Endive is a leaf vegetable belonging to the daisy family. Endive is known for its pleasantly bitter flavor that works well both raw and cooked. Endive has two forms: narrow-leaved endive called curly endive, and the broad-leaved endive which is often called escarole. The outside leaves of an endive head are green and bitter. The inner leaves of the endive head are light green to creamy-white and milder-flavored. Both types of endive are used in salad mixtures with blander- flavored lettuce to prepare a salad with a "little bite" to the flavor.

Method:
For the Soup:

If using fresh peas, shuck the fresh peas from pod and set in fridge to chill thoroughly (at least 30 min). Bring a large pot of water to a rolling boil. Add 2 ounces of kosher salt per 1quart of water.

Blanch the peas (fresh or frozen) in small batches straight from the fridge (at least 3 small batches). Cook until completely cooked but not mush. Shock in ice bath. Drain and chill.

In blender combine cooked peas (cold) and water (cold); blend until ingredients are completely pureed, and while blending slowly drizzle in the olive oil. Season with kosher salt and pepper to taste. Strain the blended mixture through a fine mesh strainer into a cold container. Keeping everything cold will insure that the soup will remain a bright vibrant green instead of a dingy gray or brown.

Combine the juice of 1 lemon and 1/2 of the zest of the lemon in a bowl with the crème fraîche. Season with kosher salt and pepper. Reserve some the of the grated lemon zest for later use.

Ladle cold soup into chilled bowls, drizzle the crème fraîche in each bowl, and sprinkle with the lemon zest and basil (finely julienned) and Fleur de Sel*. Serve immediately.

Preheat grill. Cut the head of garlic in half; drizzle each half with olive oil season with salt and pepper, then wrap them in heavy duty aluminum foil and put on them on the warm side of grill for 30 minutes. After garlic is roasted and soft (each clove should easily just slip out of the peel) Pop them out and set aside to cool. Alternatively, you can roast the garlic in the oven. Prepare in the same manner, but place in a 275-degree oven for 15-20 minutes.

Zest grapefruit. Mince the zest. Combine with juice from grapefruit. In bowl whisk the juice and zest with the roasted garlic; along with being a great flavor, roasted garlic will naturally help emulsify the vinaigrette. Drizzle in 2 tablespoons of olive oil and the honey. Season with salt and pepper to taste. Add finely julienned mint.

Cut the radicchio and endive in half, lengthwise. Wash. Season with olive oil, salt, and pepper then place cut side down on medium hot grill. Cook until the edges are slightly charred and the radicchio is just starting to wilt. Remove from grill and keep warm.

Put 4-6 pieces of shrimp on skewer; brush the shrimp with olive oil and season with salt and pepper. Place on hot grill; cook for about 1 minute each side, turning only once.

Place half of the grilled radicchio and 2 endive halves on a plate, divide skewers of grilled shrimp among the 4 plates and drizzle generous amounts of vinaigrette over all. Sprinkle with torn mint leaves. Serve immediately with an ice cold beer.