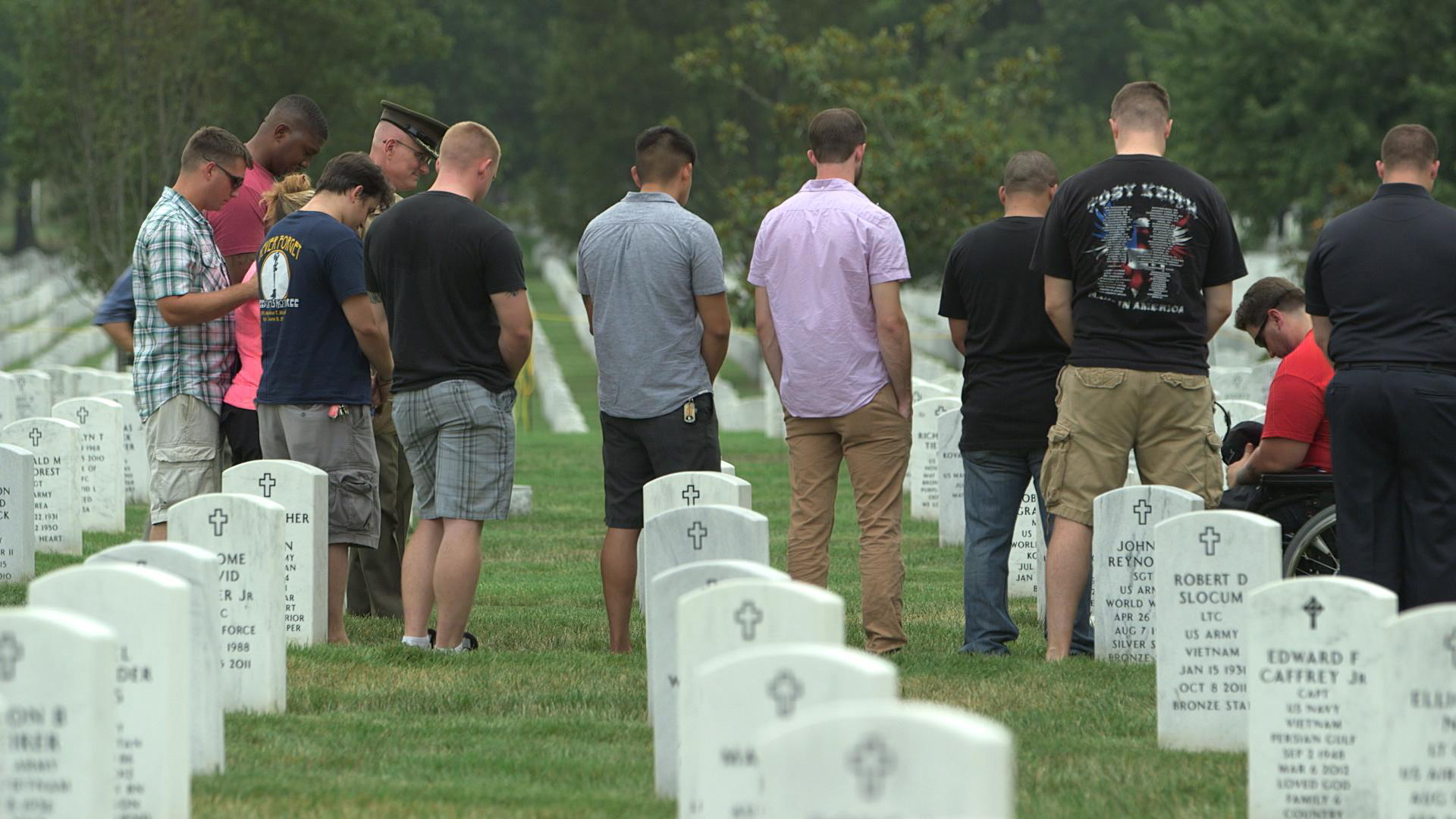 The following script is from "Coming Home" which aired on March 8, 2015. Scott Pelley is the correspondent. Henry Schuster, producer.

Two and a half million Americans served in Iraq and Afghanistan. And we wondered what's become of them long after they cut down the yellow ribbons and the camo went into hiding in the back of the closet. What do they think of their war? Was coming home the homecoming they hoped for?

Recently, we joined an annual reunion of men that we first met five years ago. It was back in 2009, Golf Company, 2nd Battalion of the 8th Marines, was taking the highest casualties on Afghanistan's most lethal battlefield. When we met them again last summer in Washington we found that their searing experience had made them brothers in war and peace.

We caught up with them on a field trip, part of their Washington reunion. They fell in without uniforms, weapons or the passing of years. They're mostly civilians now gathered in one place they could be together, the place they could say things that had been left unsaid or deliver news of the last five years. Golf Company's Lance Corporal Burrow and Lieutenant Bourgeois were enlisted in the ranks of Arlington National Cemetery. Each stone arch, a gateway through time.

This was September 2009. We were there as Golf Company stood ridged in a mud-walled memorial service. It was the first time the troops had come to grips with the terrible loss signified by seven battlefield crosses. First Sergeant Robert Pullen called the roll of the dead.

The seven Marines had died fighting to clear and hold the Taliban heartland --exhausting months negotiating around land mines and skeptical elders. Back then their orders were to use restraint. And Corporal Jonathan Quiceno told us what he thought of that.

Jonathan Quiceno: It sucks. I don't know another word to say it. It sucks, because all you wanna do is get that guy, just get them, you know, for revenge.

Revenge for the death of his friend Nick Xiarhos who was killed in 2009 by a roadside bomb. Five years later Quiceno had used his veteran's benefits for college. And now he's selling retirement plans for Lincoln Financial outside Philadelphia. He moved on but he never let go of Xiarhos.

Jonathan Quiceno: It's because of people like him that I want to continue to push harder in life and succeed, because it's the good ones that pass. And I can't let that be in vain. It drives me. It motivates me.

Scott Pelley: Is there anything that you miss about Afghanistan and the Marine Corps?

Jonathan Quiceno: Absolutely. The brotherhood. There's no question about that. You miss the sense of purpose. Right? You had a mission. You felt accomplished with everything that you do. Even at a young age. I think when you transition into the real world you have to find out what your mission is.

"It's because of people like him that I want to continue to push harder in life and succeed, because it's the good ones that pass. And I can't let that be in vain. It drives me. It motivates me."

Scott Pelley: You know, a lot of people would think you would try to forget Afghanistan and it seems to me you're trying to remember it.

Rory Hamill: I loved the camaraderie and everything that came along with it.

Golf Company's Rory Hamill was so dedicated to the camaraderie he went back to Afghanistan for another tour in 2011.

Rory Hamill: I suppose it was to try and get back at the guys that killed my brothers.

Scott Pelley: Tell me about the day you were wounded.

Rory Hamill: Came across a local national who gave us some intelligence on the ground that there was an IED in a compound next to his house. I took the minesweeper off my point man's back and I jokingly said, "See you on the other side," I got about three-quarters of the compound swept and then I stepped on a low metallic pressure plate. And my leg was instantly sheared off. I remember it seemed very surreal. My vision went gray, a lot of ringing, dust everywhere.

When the dust settled his right leg was gone, halfway up the thigh. At Walter Reed Medical Center, President Obama brought him an honor.

Rory Hamill: He awarded me with a Purple Heart. It was amazing. It was an amazing experience.

Scott Pelley: But you must've been in a pretty dark place otherwise.

Rory Hamill: Oh yeah. The first two weeks, lotta the thoughts goin' through my head were, "Why didn't I die? What am I gonna do now with my life"

Scott Pelley: Were there times you wished you hadn't survived?

Rory Hamill: Yeah, I was contemplating takin' my own life. But sittin' and thinkin' about it, realizing that I have children that depend on me, I knew that was not the right course of action.

Urged onto a different course by his father, Hamill pressed through counseling and physical therapy. He's found work managing logistics in a Navy program for wounded warriors.

Rory Hamill: In a heartbeat. It made me the man I am today.

Christian Cabaniss: Whether they like it or not, I still feel responsible, you know, for them.

Scott Pelley: They're still your Marines?

Christian Cabaniss: They always will be.

[Christian Cabaniss: In this summer of decision in Afghanistan in 2009, you are going to change history.

Christian Cabaniss: Living the dream one minute at a time.]

Today he's "Colonel" Cabaniss, and he joined this reunion.

Scott Pelley: Why do you think some of the Marines are still struggling after they've come home? After five years?

Dan O'Hara: There were definitely times when I questioned what we were doing over there.

Scott Pelley: What's the biggest threat to your Marines?

Dan O'Hara: The biggest threat would be the improvised explosive device, for sure.

He told us, then, he joined the Marines because he didn't want to regret not serving. It turned out, we met on what would be his worst day.

[Dan O'Hara: We should be good pushing up through here until we get near that IED site.]

It was a mission to defuse a landmine and it went exactly according to plan. But on the way back, Lance Corporal David Hall detonated a second bomb. And the next day O'Hara tried to give meaning to Hall's death.

After two tours, and a lot of questions, O'Hara's been recruited into General Electric's program for returning vets. He's a project manager for GE oil and gas. And sometimes he thinks about running for office.

Dan O'Hara: I had done what I wanted to do in the Marine Corps. I could say I deployed twice in the defense of my nation, so that was something I was proud of. There's certainly part of you that says, "I'm glad that that's over with."

Scott Pelley: Goodbye to all that.

Dan O'Hara: Yeah. Goodbye to Afghanistan. I won't be seeing you again.

Afghanistan did not leave Golf Company's Devin Jones. Like many others, Jones brought the war home.

Devin Jones: I mean it was rough. I didn't do anything during the day. I moved at night and that was it.

The anxiety of post-traumatic stress left him isolated and jobless.

Scott Pelley: Did you lose the apartment?

Devin Jones: For a little while I stayed in my storage unit

Scott Pelley: You were living in a storage unit?

Scott Pelley: Why aren't you reaching out for help?

Devin Jones: I felt like a complete idiot. Like, a complete failure. I went from being a very proud combat, you know, veteran to just to another, you know, percentage of the homeless vets. It's so much easier to give up. You go from having a job, stable job, having everyone that cares about you around you 24/7 to being alone, broke, eating saltine crackers living in a storage unit. Who wouldn't want to die.

But what torments Jones is that he isn't alone. There is the persistent presence of his friend Dennis Burrow. After Burrow was killed by a landmine, Golf Company put his name on a combat outpost so he wouldn't be forgotten, but it turns out that isn't the problem, the dead are immortal in the mind.

Scott Pelley: Were you there when Burrow died?

Devin Jones: I'm not sure if I really wanna go into detail on that too much. You know? I'm not-- I don't wanna be the person that the family hears that from if they don't already know. You know? It's not easy to think about that day. Because that was a pretty rough day. Sorry.

Scott Pelley: I'm sorry that it's so hard to remember that.

Devin Jones: It's all right.

Scott Pelley: You're still looking out for Burrow?

Devin Jones: Yeah. You never stop looking out for your team. Your team's everything. I've had nightmares where I've just been sittin' there just starin' at him.

Scott Pelley: Did you sometimes think you'd like to trade places?

Devin Jones: Every day. Every single day. How do I deserve to be here?

[Devin to Burrow: It's been a long time bud. Miss you dude. Don't know else to really say. Just look after us, look after, you know, everybody else, man. So I'm thinking about you bud.]

The men do look after one another. Phone calls at three a.m.--to be reminded that what got them through combat will get them through whatever they're fighting now. There is a bond that only a vet can know, that does not loosen with time.

Scott Pelley: Where do you think these Marines will be five years from now?

Christian Cabaniss: What I really hope is, you know, five years from now, they're still coming together to see each other, to talk to each other. And they're talking about their kids and the things that are going on in their lives. So they've been able to put that experience in perspective and use it as a foundation. Because I've said these kids are our next greatest generation, but not necessarily because of what they did on the battlefield. It's gonna be because of what they did when they got home.

The chaos behind family separation at the border

eVTOL: The flying vehicles that may be the future of transportation
Scott Pelley