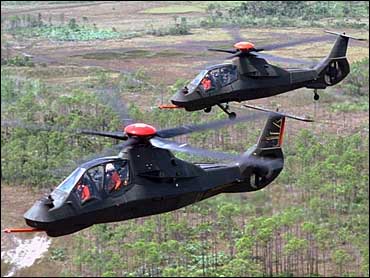 The Army has decided to cancel its Comanche helicopter program, a multibillion-dollar project to build a new-generation chopper for armed reconnaissance missions, officials said Monday.

The contractors for Comanche are Boeing Co. and Sikorsky Aircraft Corp.

With about $8 billion already invested in the program, and the production line not yet started, the cancellation is one of the largest in the history of the Army. It follows the Pentagon's decision in 2002 to cancel the Crusader artillery program — against the wishes of Army leaders.

Congressional lawmakers and company executives associated with the program were scrambling Monday to figure out the Pentagon's plans.

Sikorsky spokesman Matthew Broder would only say that "we are on track and fully funded until we hear otherwise."

The Sikorsky plant in Bridgeport, Connecticut, where the Comanche is being built, opened last year and employs about 400 workers.

The Comanche has been a target of critics who say it was an expensive mistake.

"The Comanche program has been plagued with wildly unrealistic technological expectations and the bugaboo of pay more and get less. Cancellation of this program would free up funds for weapons that work and meet our country's true national security needs," said Eric Miller of the Project on Government Oversight, a private watchdog group.

Loren Thompson, who follows aviation and other defense issues for the Lexington Institute think tank said he believes the Army under new chief of staff Gen. Peter Schoomaker favors ending the Comanche program, even though the service had been counting on it to provide a new reconnaissance capability.

"The Bush administration has now killed the two biggest Army weapons programs it inherited from the Clinton administration," Thompson said, referring to the Crusader and Comanche.

Earlier this year the White House budget office asked the Pentagon to provide independent reviews of the Comanche and another expensive aviation program, the Air Force's F/A-22 Raptor fighter.

Although killing the Comanche project would save tens of billion in future costs, the cancellation decision is expected to require the Army to pay at least $2 billion in contract termination fees.

The Comanche program was started in 1983 and had survived many reviews. Under a restructuring worked out in 2002, a decision on going ahead with initial low-rate production was to be made in 2007, with the first Comanches delivered to the Army in 2009 and full-rate production to begin in 2010.