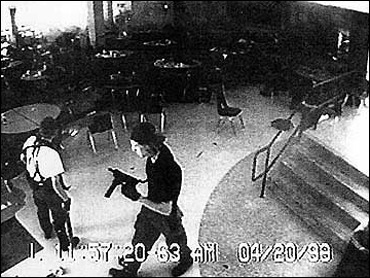 A report on the Columbine High School massacre due out Thursday could answer questions about what police knew before the shootings that left 13 victims and two gunmen dead.

Attorney General Ken Salazar planned to deliver the report on whether the Jefferson County Sheriff's office paid enough attention to warnings that killer Eric Harris was making death threats. Afterward, he was to allow the public to view the evidence in the case.

The families of the victims of the April 20, 1999 massacre were the first to see, in private, that mountain of evidence: everything from the guns the teenage attackers used to kill classmates, to the furniture from the cafeteria where many died, to arrest and autopsy reports, reports CBS News Correspondent Bob McNamara.

The family members and survivors who attended said they were kept about three feet away as they walked past the tables. They could look, but not touch or remove items.

The collection included computer screens, shell casings and pieces of clothing sealed in bags. There are also amateur videos of Harris and accomplice Dylan Klebold, similar to the chilling images released last year of the pair practicing with their deadly arsenal six weeks before the school attack.

Darrell Scott, whose daughter Rachel was killed in the shootings, said seeing the evidence was "impossible to fully describe."

"It was an emotional event for everyone there to walk in and see," he told the CBS News Early Show. "And probably the most emotional for any one of us would be to see the weapon that killed our child or that killed the teacher."

"And one moment for me was when I saw the picture of Dave Sanders who was one of my heroes, who was the teacher that was killed at Columbine. There is a still shot of him as he's going up the stairs to confront the two boys and everyone else is running out of the cafeteria. And you can see in his stride, it's a purposeful stride toward his own death. He knew that he was going to possibly die when he confronted those boys. And he'll always be a hero of mine," Scott said.

Some of the evidence is expected to show that Harris and Klebold were on police radar nearly two years before the attack.

Brian Rohrbough, whose son, Danny, died at Columbine, said he was hopeful that he would get the answers he and other family members have been seeking. He said if Salazar's investigation does not answer important questions "we're going to keep looking until we get the answers."

Rohrbough and been one of the most vocal critics of the sheriff department's failure to follow up on tips about Harris in the 18 months before Columbine. "I have a hard time sleeping at night because I cannot share with you what I know," he said hours before the report was to be released.

Rohrbough and some other relatives of victims have seen a deposition given by Wayne Harris, father of Eric Harris. A federal magistrate has ordered the deposition, which is already sealed, destroyed. It was given for a lawsuit against the parents of Harris and fellow gunman Dylan Klebold that has been settled.

Rohrbough also is pressing for release of an investigation by the school district, which the district insists it must withhold because teachers questioned during the probe haven't given their permission. Rohrbough is convinced school staff saw a video the teen killers made that gave a hint of their plans.

"We were lied to about a number of things and it seems like that things were hidden from us and we never understood why," said Scott.

"And I honestly think the answers are not in the things we looked at yesterday. I think they're in sealed reports and possibly things that have been destroyed," he said.

Just 60 people came to see the evidence display Wednesday, all of them walking solemnly away.

"Nothing can be any more horrible than to see your son's bloody chalk line," said Patricia DePooter, whose son, Corey, was killed.