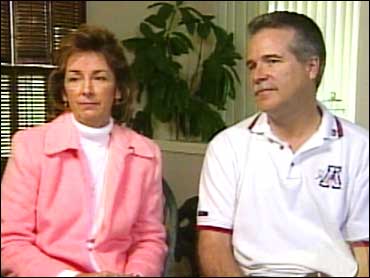 A sign in front of Columbine High School sets the tone for the fifth anniversary of the worst school shooting in U.S. history: "A Time to Remember, A Time to Hope."

The Early Show correspondent Hattie Kauffman, reports that a park adjacent to the school, where on April 20, 1999, students Eric Harris and Dylan Klebold gunned down 12 students and one teacher, will be the site of a ceremony and a candlelight vigil Tuesday night.

For the families of the victims, five years later, the grief remains strong, but so does the anger, the feeling that some, if not all, of the deaths could have been prevented.

Kelly Fleming's mother says, "April 20th should never have happened. There were too, too many signs along the way that were missed."

Some parents who buried children killed at Columbine High haven't forgiven the authorities, who they say failed to stop Harris and Klebold.

On April 20, 1999, the two boys entered the school with an arsenal of weaponry and had planned even more devastation that was foiled when their bombs failed to ignite. In addition to the 12 deaths, many more were injured.

The police response that day still provokes outrage. As students poured out of the school, police did not move in. Teacher Patti Nielson made a frantic 911 call.

Here is her conversation with the police dispatcher:
Nielson: "He turned the gun straight at us and shot. And my God, the window went out. And the kid standing there with us, I think, I, he got hit."

Lauren Townsend's step-father, Bruce Beck asks, "Why did the 911 operator tell Patty Nielson to keep the kids down, help is on the way, when they knew they weren't going to send any policemen into the building?"

Both Kelly Fleming and Lauren Townsend were killed in the library, where students had fled to hide under the desks.

Dawn Anna says, "Our Lauren was told the police were coming."

Dee Fleming says, "You know. while Kelly was hiding in the library, waiting for help, nobody was coming. You know, you just storm the place, you don't stand back."

Three hours went by before police entered the school. Even as a wounded student came to a window to be dragged out, the SWAT teams were held back. Inside, teacher Dave Sanders lay dying in a classroom.

Bruce Beck says, "It's unconscionable to us that Dave was left on that floor to die."

Jefferson County district attorney, Dave Thomas had to tell the parents, five years ago their children had been killed. Asked why law enforcement didn't go into the building, he says, "Well, law enforcement has gone back and they've looked at the way in which the response was handled here at Columbine. And they've made a lot of changes. And I think most of those changes are for the better. And I think all of us, whether we're law enforcement or the school districts or parents, have gone back and reflected on this incident and tried to see what changes we could make to make sure this doesn't happen again."

In another controversy, authorities have admitted numerous complaints were made against Harris and Klebold before the attack. They were never followed up.

Families of the victims say the warning signs were clear: Misplaced police reports, prophetic videos made by the killers at the school itself, a father's secret journal, a Web site and an essay promising death.

"How many times have we heard this was everything, only for something else to come out?" asks Dawn Anna. "The first time we heard that was back in 1999."

Some 30,000 documents in the case have been released over the years. Another 40,418 pieces of evidence, ranging from a tooth fragment to propane tanks, were put on public display earlier this year.

Local authorities, the school district, a state commission and the Colorado attorney general have all investigated, but the question remains: Why didn't someone - a parent, a sheriff's deputy, a teacher, a fellow student - step in before the suicidal gunmen went on their rampage?

Victims' families have tried to get answers: Some sued the sheriff's department, the school district and the parents of the killers. They won damages, but a federal judge sealed many records.

At the heart of most questions is the Jefferson County Sheriff's Office, which responded to the massacre and led the official investigation. Its track record is spotty at best.

After the shootings, sheriff's officials downplayed tips about Harris making death threats - even though they relied on them to get a search warrant for his home hours after the bloodshed.

Randy and Judy Brown, whose sons were threatened by Harris, made several attempts to get the sheriff's department to investigate.

The tips started in 1997, when one of the Browns' two sons gave a deputy a printout of a Web site on which Harris boasted of going on nighttime missions with Klebold, firing weapons and vandalizing property.

The Web site later included boasts by Harris and Klebold about
building pipe bombs and referred to "ground zero."

The tip was forwarded to investigator John Hicks, no longer with the force. A warrant was drafted to search the Harris home, but it was never executed. A report by Hicks was found tucked inside a training manual just six months ago, a stunning revelation that prompted new Sheriff Ted Mink to ask Colorado Attorney General Ken Salazar to investigate.

Salazar said he found no negligence by the sheriff's department, though he found at least 15 instances of contact between law enforcement and one or both of the killers.

Other warning signs included violent videos made by Harris and Klebold for a class project and an essay by Klebold in another class describing a Columbine-like slaying of "preps." In one video project five months before the rampage, the two stalk through Columbine itself, offering hit-man services to classmates tired of being bullied.

Harris and Klebold were arrested for a break-in a year before the attack, but parole officers were never told about the death threats tied to the teens. Both completed probation and were deemed to be likely candidates for success as adults.

"There was overwhelming evidence. Columbine should have been prevented," said Brian Rohrbough, whose son, Daniel, was one of the first to die. "We cannot turn back the hands of time, but we can put all this information out on the table. ... We can make this an example of what went wrong so that we can prevent it from happening again."

Most excruciating for some of those seeking answers is the fact that some information is being kept secret. The Harris and Klebold families were forced to give depositions to settle a lawsuit, but what they said remains sealed.

Joe Kechter, whose son, Matt, died at Columbine, said the lawsuit was settled because families were running out of money to fight the insurance companies whose homeowners' policies covered the Klebolds and Harrises.

"I hope some day the Klebolds and Harrises agree to get this information out so it can save other kids' lives in the future," Kechter said. "I am doing this in respect of my son. I feel the police and the whole system let him down that day. I am not going to let him down."

"I really don't think we are going to get any more answers," said Al Velasquez, whose son, Kyle, was among those killed.

But the horror of Columbine may have improved school safety nationwide. Surveillance cameras, metal detectors, and I.D. badges are now common in schools. Most of all, the tragedy raised vigilance, and other deadly plots have been averted. Near Los Angeles last year, classmates reported two students who were making threats. There was a detailed journal, which included references to inflicting harm upon the faculty and other students at the high school.

In Spokane, a Columbine tragedy was averted when police evacuated the school within minutes of a shooter entering.

And in Northern California, an alert teen prevented a massacre at a local college. Police uncovered weapons and a Web site worshipping the Columbine killers - red flags that, today, no one is ignoring.

Dawn Anna says, "There is no excuse for a child to go to a school library on a school day. and not make it out alive."

Dawn Anna will be among the memorial speakers along with victim Anne Marie Hochhalter, who remains paralyzed from wounds inflicted by the killers.

The students who were enrolled at Columbine then are long gone; the 1998-99 freshmen class graduated two years ago. But now among the students are brothers and students of those wounded in the attack.

The only administrator left is Principal Frank DeAngelis, who said
staying at Columbine helped keep him sane.

He tells The Early Show co-anchor Harry Smith, "I refer to what Klebold and Harris did that day as an act of terrorism. That's part of the reason I was back at Columbine High School. I was not going to let them win.

"People ask me when is going to be that magical day that everything is back to normal at Columbine. And I say that day will never come, it will never exist, because what happened on April 20, 1999, will remain with us forever. We will never be back to normal. We just learn to cope and heal and build upon the strength of one another."

None of the 1,700 students of Columbine will be in class Tuesday, since the campus is always closed on the anniversary of the attack. Rick Kaufman, spokesman for the school district, said security was stepped up for Monday's classes.