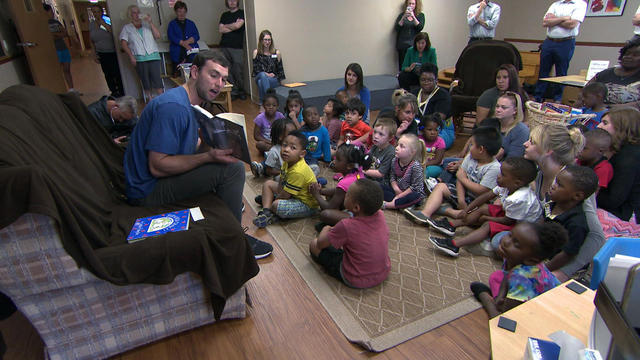 Long before Indianapolis Colts quarterback Andrew Luck was reading NFL playbooks, he was simply reading. Bookworm or bibliophile – however you describe him – that was a young Andrew Luck. Now, because Luck is using his star power to encourage the young and old to read, some people are calling him the NFL's unofficial librarian.

"I don't think I have a conscious, sort of revelation, memory of, 'Oh the first time I read a book was here or there.' I just always remember enjoying reading, and there were always books in our house," Luck told CBS News' Dana Jacobson.

What did he love about books as a kid? "I think it's the same thing as today," he said. "You learn some really cool things ... Reading really requires you to shut everything else off. And I enjoy that."

Whether it was during his college years playing football at Stanford or now in the NFL, Luck says his passion for reading has never dwindled even when his time to do so has.

"I definitely don't read as much when I'm in season. There is no time, probably before bed, ten minutes, just to sort of clear my mind, and I've always felt like it helps me sleep," Luck said.

Now, Luck is sharing that part of who he is more formally. The Andrew Luck Book Club will celebrate its second anniversary this April. The club has monthly reading choices for both veterans and rookies and since the club is based on social media platforms like Twitter and Facebook, interaction is easy.

"I just choose a book, or two books, a rookie and a veteran book, a month. I try to keep it very simple," Luck said of his selections. "Rookies generally are the books that I read as a child … And then the veteran books are sort of what I'm reading now, and I thought that would be a fun way to maybe encourage people who wouldn't read, to read and pick it."

Some of those people being Luck's teammates. Punter Jeff Locke was with the Colts during part of training camp. When people think of book clubs, they're more likely to think of Oprah than an NFL player.

"He has so much going on. He has a huge playbook to study. He's helping players, he's doing all of these other things in the community. To picture him just going home and reading a couple chapters every night and then being able to interact with his fans about a book," Locke said.

Another part of Luck's book club is his podcast.

"Podcasts have really been a thrill, to talk to authors, I think it's such a cool thing. And I've become a fan boy very much," Luck said. "A little bit of a role reversal in a sense….There's always a little mutual respect and affection."

That affection is most apparent when Luck takes the book club off social media and into a face-to-face setting.

"The most impactful thing for me has been the opportunity to go to a classroom, or nursery school, or somewhere in the community and read with, or to kids," he said. "The majority of the kids have no idea who I am when I walk into a room. Well, some of them, the older ones maybe do."

But he says as soon as he starts reading, it's the book they are into.

"Part of the job is to make sure you are doing something positive with the platform ... To me there's nothing more positive than trying to affect a kid in a good way."

The goal of the club? Get someone who wasn't planning to read, to do just that.

"In a really sort of a simplistic view, the goal is that if one kid would pick up a book, that maybe otherwise wouldn't have and they have fun reading it ... That to me would be a good day."