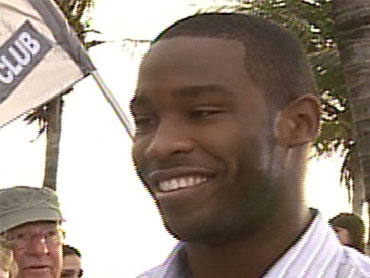 One of the great storylines of Super Bowl XLIV is Colts wide receiver Pierre Garcon.

He's had a breakout year on the field, but fans are really taking notice after the Haitian-American star cloaked himself in Haiti's flag following the colts win in the American Football Conference championship game.

Garcon said on "The Early Show" when he was covered in his country's flag, he was thinking about the people of Haiti.

He said, "I was just trying to give them something to smile about. Give them a little pride, just to be Haitian and to know that we're thinking about them here in America."

"I'm glad I could have a positive impact on those people over there. That's why I try to do. In the community, too," he said.

To that end, Garcon has teamed up with Charles Fazzino, an artist who specializes in hand-painted helmets for the National Football League. Together they created a decorative signed helmet to benefit Haiti relief. Garcon hopes to raise at least $5,000 to $10,000 for his Helping Hands Foundation. To bid on the helmet, click here.

As for the Super Bowl, Garcon said the Colts camp can't wait for the game to start.

"We've been practicing for two weeks now," he said. "We have our game plan in, and we're just ready to go."

Garcon added that working with star quarterback Peyton Manning has been a "dream come true."

"He's No. 1 quarterback in the league," Garcon said. "He's a great person, great leader of our team. He's always wanted the guys to do better."