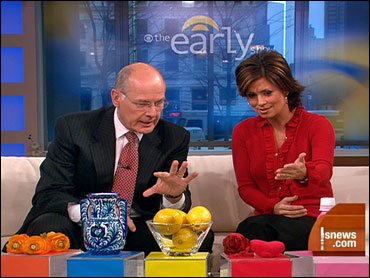 We learn from a young age that red means danger -- so should we use red ink for medication warnings? And if blue signals the freedom of open skies, how about brainstorming in a room painted blue?

Maybe so, says new research into how the brain reacts to colors: Red seems to improve attention to detail while blue sparks creativity.

"People are not aware of this effect at all," marvels lead researcher Juliet Zhu of the University of British Columbia, who studies how environmental hues affect behavior.

The subconscious effect of color is a hot area of psychology research, in part because marketers try to use color to hook us on whatever they're trying to sell.

And the newest research, published Thursday by the journal Science, suggests they'd better be careful -- because red or blue can spark very different brain reactions depending on the task involved.

The Early Show co-anchors touched on the subject during Friday's broadcast.

"This is surprising because a lot of parents paint their babies room yellow and it's the color that makes infants cry more than any other color," said Early Show co-anchor Maggie Rodriquez.

"It's good if you want your baby to have lungs that are very developed," said Early Show co-anchor Julie Chen.

Chen, who was wearing red and was behind a blue background pointed out that the study also says that red and blue makes men more amorous to women.

The study put college students through a series of cognitive tests, most involving computer screens colored either red or blue. Both colors could enhance performance but in very different ways.

Students memorized more words when the list was on a red screen, for instance. Told to think of different uses for a brick, those shown a red screen listed practical things like "build a house" while those who saw blue got more creative with "make a paperweight' and "build a pet scratching post."

When they rated ads, those who saw red backgrounds focused on what to avoid - they liked toothpaste that stressed cavity-fighting over tooth-whitening - while those who saw blue went for the creativity of a camera ad that showed travel images instead of touting the zoom lens.

Because we learn early that red means to avoid danger, maybe it's slowing us down in detail-oriented tasks so we can do them better - things like memorizing, proofreading, reading warning labels, concluded Zhu, an assistant marketing professor, and co-author Ravi Mehta.

But people associate blue with sky, freedom, peace, maybe sparking a feeling of exploration than in turn enhances creativity.

"It's really this learned association with these colors that drive these different motivations," Zhu said.

If the findings are right, the creativity discovery could be a big advance - no one's ever made such a link, said Andrew Elliot of the University of Rochester, a leader in the field of color psychology.

But he had a big caution: The study focused on hue without properly taking into account the intensity and brightness of the colors, meaning it should be repeated to be sure.

Most color research has focused on red, finding, for example, that it makes good sports uniforms because it's intimidating. Elliot found red is truly a good Valentine's color, making men consider women more sexually attractive than other colors do.

But how the brain reacts depends on the question you ask, Elliot said. When he flashed red at students before an IQ test or exam he found it undermines performance, maybe making them think of the failure that a teacher's red pen marks evoke.

The bottom line: "What color research shows is our behavior is driven by things we aren't aware of, by things we see on a regular basis," he said. "It's important to know, so when one sees red one can maybe try to counteract the natural tendency to make mistakes and fail."