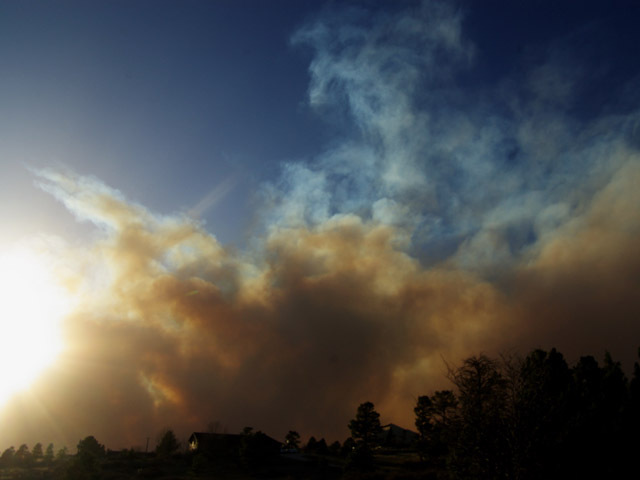 (CBS/AP) CONIFER, Colo. - The residents of about 900 homes have been evacuated and more are under threat Tuesday as a wind-driven wildfire scorched a mostly rural area in the mountains southwest of Denver.

The blaze, several miles and mountain ridges west of the city's tightly populated southwestern suburbs, has destroyed 15 to 25 structures, at least five of which were homes, authorities said.

A body was found late Monday but investigators have yet to determine the cause of death. The victim wasn't a firefighter or emergency responder, Jefferson County sheriff's spokeswoman Jacki Kelley said.

The fire spread to nearly 5 square miles within a matter of hours, spurred by high wind gusts that prevented air crews from helping firefighters on Monday. Forecasters said gusts were expected to be lighter on Tuesday, though a period of stronger winds was expected in the afternoon.

"The wind will really tell the story today," Kelley said.

The wildfire may have been a prescribed burn from last week that sprang back to life because of the gusts, Kelley said. Prescribed burns are usually done to thin out vegetation to reduce the chances of a major wildfire.

Ryan Lockwood, a spokesman for the Colorado State Forest Service, said his agency conducted the prescribed burn on Thursday on land belonging to the Denver Water Board as part of an ongoing attempt to reduce fire danger. Such burns are usually done to thin out vegetation.

"This has been going on for the past year," said Lockwood. Stacy Chesney, a spokeswoman for Denver Water, said decisions about prescribed burns are left to the state forest service, which has a contract for protecting land that feeds into reservoirs.

Temperatures lately have been reaching into the 70s during an especially dry March, raising the fire danger around Colorado.

Video from KUSA-TV's helicopter showed one home burned to its foundation with a flicker burning in the rubble. Another home appeared untouched, a car parked in the driveway, although land across the road was charred.

The fire was about 25 miles southwest of Denver in a rugged, largely rural area where the altitude ranges from 7,000 to 8,200 feet. The region of pines and grassland is dotted with hamlets and the occasional expensive home. Denver's southwestern suburbs were not under threat.

About 100 firefighters were deployed to protect homes overnight.

Shelters were set up at high schools in Conifer and in the southwest Denver suburb of Littleton.

Fewer than 100 people were at the shelter at Conifer High School late Monday. Many ate pizza and fried chicken and watched TV as volunteers wheeled in dog and cat food for pets that were put up in two classrooms. About 50 cots were set up in the gym, where kids played basketball to pass the time. Conifer was on spring break so classes weren't disrupted.

County officials updated nervous residents early Tuesday, asking anxious homeowners to leave behind their addresses so they could be called with the status of their homes. They were told they wouldn't be allowed to return home yet.

"We will not be able to allow any citizens back into that area (until) at least the end of the day — and that's not a promise," said Daniel Hatlestad, spokesman for the Jefferson County Incident Management Team.

He said rescuers brought out an unknown number of people who were trying to flee by car but were forced to pull over because of low visibility. Hatlestad said winds neared 90 mph Monday evening, so even cars couldn't outrace the smoke.

"We were pushing people and dogs and cats into fire trucks," he said.

Temperatures lately have been reaching into the 70s during an especially dry March, raising the fire danger around Colorado. Up to a dozen smaller fires were reported from the northeast Colorado plains to the southern part of the state.

Kathy Wilkens, a 21-year Conifer resident, got a reverse-911 call at 8:30 p.m. She, her husband and two teen boys took shelter at the high school.

"Normally, we have a lot of snow this time of year. You'd just never think you'd have to evacuate for a fire in March," Wilkens said.

Rose Applegate said she received a call at 6:30 p.m. She had seen smoke in the afternoon and expected to be evacuated.

"I could tell we were in the path," Applegate said. "We gathered up a few things and came here."

She and her husband were staying the night. "We're going to stay close around here because we want to know what's going on," she said.

The fire sent up billows of smoke that dominated the sky over Denver. The National Weather Service said weather radar showed the smoke plume had drifted about 100 miles to the northeast by nightfall.

Up to a dozen smaller fires were reported from the northeast Colorado plains to the southern part of the state Monday. There were no immediate reports of injuries or structures destroyed in any of the other fires.

Colorado Congressman Mike Coffman offered his sympathies to those whose homes were destroyed and said he would would work to get federal firefighting equipment and teams should the Jefferson County sheriff ask for it, CBS affiliate KCNC Denver reported.