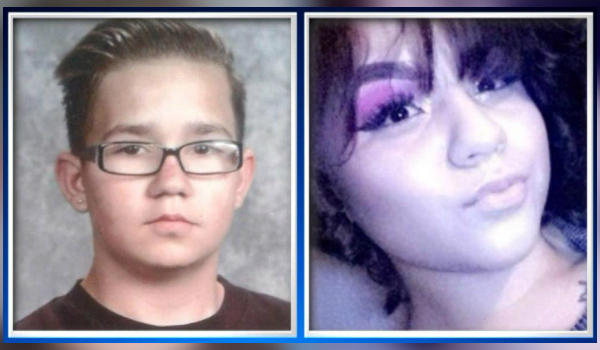 DENVER -- Two Colorado teenagers who were found dead along a rural road were forced into an "execution position" and shot at close range after a feud over a stolen purse, according to documents released Thursday.

Gustavo Marquez, 19, told investigators that Natalie Cano-Partida, 16, and Derek Greer, 15, were kidnapped March 11 and shot multiple times by two other men, according to his arrest affidavit. Marquez and four others have been charged with first-degree murder.

A passing driver spotted the bodies the following day about 20 miles south of Colorado Springs in an area dotted with cattle ranches.

Marquez told investigators that a co-defendant, Diego Chacon, killed Cano-Partida and then handed his gun to another co-defendant, Marco Antonio Garcia-Bravo, who killed Greer moments later.

According to the affidavit, Marquez said Garcia-Bravo offered the girl a chance to say goodbye to her family through Facebook, but when she did not immediately log in to her account, Garcia-Bravo took the phone back and told her she had lost her chance.

Another witness said one of the suspects told her that he was going to kill one of the teens over a purse that went missing during a party, police said.

Authorities found Marquez walking on a median and falling into traffic about a week after the slayings, and he told an officer he had information about the teens.

Marquez's mug shot shows a tattoo across his face that says "Santa Muerte" -- "Holy Death" in Spanish -- a skeleton folk saint often associated with violence and drug trafficking but also has a following among a variety of people, including the poor, artists and immigrant small-business owners.

Booking documents do not indicate if Marquez, Garcia-Bravo and Chacon have hired attorneys. A call to the El Paso County courts clerk was not immediately returned Thursday.