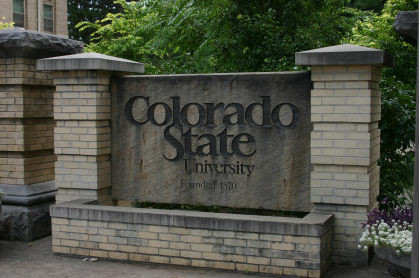 FORT COLLINS, Colo. --  Two Native American students from New Mexico were taking an admissions tour at Colorado State University Monday when a parent on the tour got nervous about the young men, who joined the tour late, and called campus police, CBS Denver reports. Thomas Gray is a freshman at Northern New Mexico College, but his mom says his dream school is CSU. She says Thomas and his younger brother planned the campus visit as a bonding experience.

"I was nervous for them to get in our family car and drive seven hours to a place they've never been before and find their way around and fight the Denver traffic," said Lorraine Gray, the boys' mother.

She says she was initially relieved when she got a text saying they'd arrived, but 30 minutes later, got a disturbing phone call.

"I got a frantic phone call from Thomas saying 'somebody called the police on us because we were quiet," Gray said. "And I couldn't believe it. I thought he's just messing with me."

The boys told her they were too shy to speak up during introductions, and that's when another parent contacted CSU police.

In an email to students and staff Wednesday, university officials outlined what happened, saying in part: "The CSUPD spoke with the students, confirmed they were part of the tour, and allowed them to rejoin the group. Unfortunately, due to the location of the tour when the contact was made, the admissions tour guide was unaware that police had been called or responded, and the tour group had moved on without the students, who returned to Ammons Hall briefly, then left campus to return home to New Mexico."

The university called the incident sad and frustrating, and says it has reached out to the family. University officials say they are also meeting with admissions, the Native American Cultural Center, and the CSUPD to review how an incident like this could be avoided or handled more appropriately in the future.

Gray said her sons were upset and didn't want to bring attention to the incident, but believes the issue needs to be brought to light.

"I'm of the belief that if you keep quiet about things then they're going to continue to happen," she said. "It's our responsibility to speak out and let other people know what's happening."