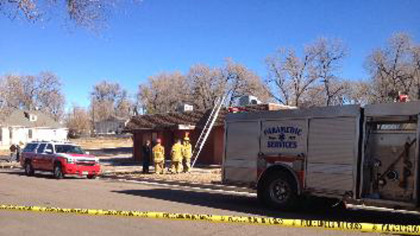 DENVER -- Staff members at a Colorado NAACP office say they are waiting for more information before drawing conclusions about an explosion near their chapter, even as the FBI investigates whether the blast was domestic terrorism.

"We're standing vigilant and are trying not to let this disrupt anything," Colorado Springs NAACP volunteer Harry Leroy said Wednesday, a day after someone set off a homemade explosive device outside the group's building, about an hour south of Denver.

The FBI said it had not determined whether the nation's oldest civil rights organization was targeted.

"We're exploring any potential motive, and domestic terrorism is certainly one among many possibilities," Denver FBI spokeswoman Amy Sanders said.

An improvised explosive device was detonated about 11 a.m. Tuesday outside a barbershop that shares a building with the NAACP chapter, but a gasoline canister placed next to the device failed to ignite. There were no injuries and only minor damage to the low-slung building, which sits in a mostly residential neighborhood.

Speculation swept across social media about whether the explosion was a hate crime. Investigators have not ruled out any possibilities, and members of the FBI's Joint Terrorism Task Force are investigating because of the explosion's proximity to the NAACP office, Sanders said.

Investigators apparently have few leads. They are looking for a person of interest - a balding white man in his 40s who might be driving a dirty pickup truck.

In a joint statement Thursday, local law enforcement and Colorado Springs NAACP President Henry Allen Jr. said the case was a high priority and that tips from the public provided the best hope of figuring out who was responsible.

"Regardless of if this act is determined to be a bias motivated crime, the law enforcement community in El Paso County does not condone this or any act of violence," it said.

Both the office and the barbershop reopened Wednesday with little police presence.

Gene Southerland owns Mr. G's Hair Design Studios next door and was cutting a client's hair there when the explosion occurred. The blast was strong enough to knock items off the walls, but the quick police response was comforting, he said.

Southerland said the FBI had given him no information on its early findings but said he didn't believe the barbershop or its predominantly black clientele was targeted.

Leroy, the NAACP volunteer, said he believed there were surveillance cameras behind the building, but he did not know whether they captured anything of value.

Gregory Alan Johnson, who lives nearby, said he was unaware of any prior problems near the NAACP offices. Colorado Springs Lt. Catherine Buckley said the department found nothing concerning in any previous calls for service.

Those who heard the blast, including Southerland, said it sounded like a single, loud "boom."

"This is proof that racism is still alive and reared its ugly head in the form of this cowardly act. Regardless of the actions of others, we will continue to fight for the equality of all people," it said in a statement.