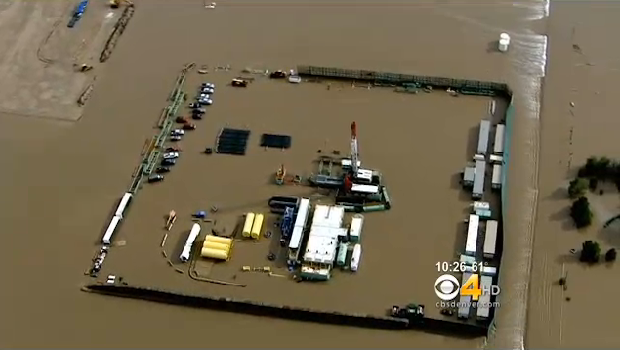 The devastating flooding that pummeled Colorado the past week, also inundated a main center of the state's drilling industry, temporarily bringing production of natural gas to a halt.

The mix of floodwaters and drilling operations has also spurred environmental and health concerns that industry and government officials say they are closely monitoring, and that activists have seized on as another demonstration of the dangers posed by hydraulic-fracturing.

Pictures and videos that cropped up on anti-fracking sites and in local news outlets in recent days show inundated oil pads, flooded wells, and, in some cases, overturned tanks and ruptured lines. Many were reportedly captured in Weld County, an area northeast of Denver and Boulder that was hit hard by the flooding.

With nearly 18,000 active wells, it's also a main drilling center in Colorado, a state that increasingly relies on hydraulic-fracturing for its energy production.

"Our biggest fear is that oil and gas hydrocarbons and hydrofracking chemicals will get into the water supply, and that the flooding will spread the pollution over a large swath of the landscape."

While industry representatives have downplayed what one executive called the "social media frenzy" of photos and videos due to lack of information, they have taken steps to mitigate concerns, including stopping the flow of oil at potentially affected wells, a process known as shutting in.

Doug Hock, the director of public relations for Encana Oil & Gas which operates a number of wells in the area, said that of the 1,241 wells Encana operates in the energy-heavy Denver-Julesburg Basin, 397 were shut in last week. Since then, 99 of those shut in have returned to production.

"We still have not found any spills of any reportable quantity, but cannot rule out future discoveries until we get to everything," Hock said Tuesday.

For their part, Colorado officials have been "aggressively assessing the impacts of the flood to oil and gas facilities," Colorado Department of Natural Resources spokesman Todd Hartman said in a statement.

Officials note that there's still limited information concerning the status of the area's oil and gas locations, but are warning about the potential health risks associated with hazardous materials in the flood water.

"The Colorado Department of Public Health and Environment is advising Coloradans that many contaminants, such as raw sewage, as well as potential releases of chemicals from homes, businesses and industry, may be contained in the floodwaters," Hartman said in his statement.

"People are encouraged to stay out of the water as much as possible."

Specialists in the hydraulic fracturing field offered mixed assessments of the situation.

"They're being overly cautious," said William Fleckenstein, the interim department head of petroleum engineering at the Colorado School of Mines, referring to the activists' concerns about flooded wells.

Most natural gas wells, Fleckenstein said, are designed to withstand large amounts of pressure, and to stay sealed under all conditions. Though he noted that it's hard to predict the potential damage posed posed to a well site by rushing water combined with debris.

"With just inundation -- unless the ground is structurally being damaged -- the wells should be in fairly good shape," he said.

In Colorado though, according the the Colorado Oil and Gas Association, the wastewater is generally stored in holding and treatment tanks before disposal or reuse. A June 2012 Colorado Oil and Gas Conservation Commission presentation on regulating pits includes pictures of open-air pits in Weld County.

Colorado officials said that they are assessing the impact to open pits, but that generally there are fewer pits in the Wattenberg Field area where the floodwaters struck than in areas further east, which were mostly unaffected by the floods.

In response to a inquiry from CBSNews.com, CDNR's Hartman said: "It's important to remember what's in the pits, and their purpose. Pits are rarely used in hydraulic fracturing operations in northeastern Colorado. Fracturing and flowback fluids are held in storage tanks and then are either recycled or transported to a disposal well. The pits that are used during hydraulic fracturing store fresh water. It is also quite rare to have a drilling pit in the western part of the DJ Basin as companies have moved toward closed loop drilling as a way to reduce the size of their surface disturbance and in order to reuse the drilling fluids."

Jackson also said chemicals on inundated oil pads where drilling occurs could present a health and environmental concern, though Fleckenstein said regulations would have kept oil and gas companies from storing those chemicals in an unsafe manner.

Spills, however, do happen. A search of COGCC's online record's indicate that the state recorded nearly 20 spill incidents in September before the floods. A number of them took place in Weld County, and in some cases involved hydrocarbons and benzene, a liquid the American Cancer Society lists as a carcinogen.

The mix of flooding and hydraulic fracturing was a concern in New York in 2011, as the state debated the safety of the practice and dealt with its own flooding after heavy rains in the state.

An anti-fracking group Catskill Mountainkeeper warned then that future floods "could lead to catastrophe if fracking is approved in New York State because the danger of toxins from fracking wastewater getting into our water supply from floodwaters is especially acute."

"This is a real concern. We were talking about it two years ago," Wes Gillingham, program coordinator for Catskill Mountainkeeper, said in an interview. His groups is now closely watching the events in Colorado, he said.

"People need to understand what kind of contamination has happened on the local level in Colorado and what health impacts it has. That's what we're all wondering in New York."

Industry officials said they would assess and address the damage as the water levels returned to normal.

"They types of activities include continuous monitoring of operations, shutting in wells, evaluating midstream facilities, conducting environmental checklists, aerial surveys, and responding to calls and mitigation of potential hazards as they are identified," Colorado Oil & Gas Association President Tisha Schuller said in a statement Monday.

"We have seen the social media frenzy regarding pictures of oil and gas facilities 'under water.' While the pictures seem extraordinary, there is no data or specifics provided."