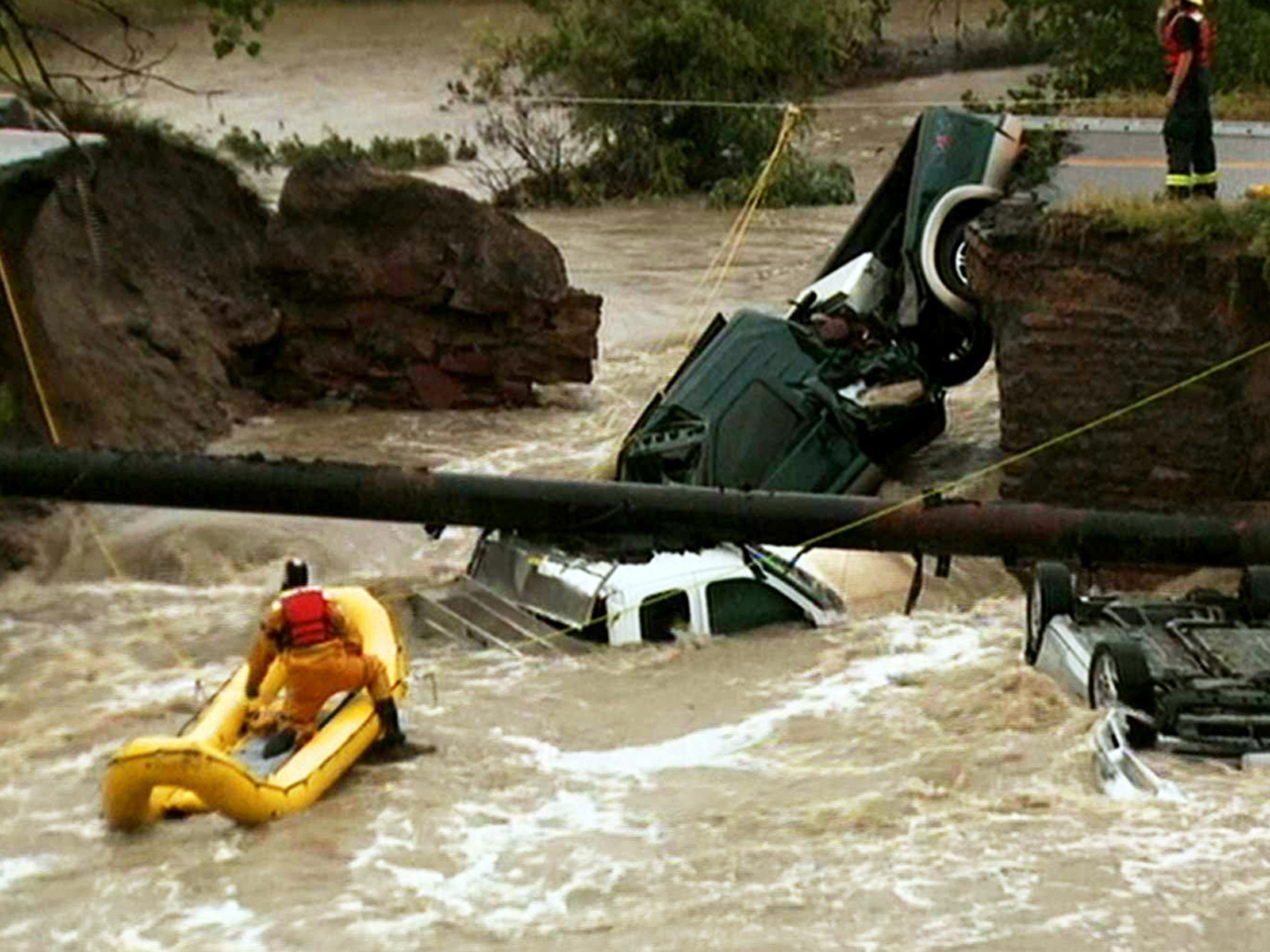 After a rainy week, up to 8 more inches fell in an area spanning from the Wyoming border south to the foothills west of Denver. Flooding extended all along the Front Range mountains and into some cities, including Colorado Springs, Denver, Fort Collins, Greeley, Aurora and Boulder.

Numerous roads and highways were washed out or made impassable by floods. Floodwaters poured into homes, and at least a few buildings collapsed in the torrent.

As CBS News correspondent Barry Petersen reported, Nate Foster heard a horn honking at about 1:30 a.m. A neighbor was trapped in a car. With roads cut off there was no help from fire and police, so the first responders had to be Foster and his neighbors. They rescued her and her cat.

"We were a little concerned that the car would keep going, so 23 waited for level kind of subsided a little bit and did a chain and got her out."

And why did he do it? "She needed help," said Foster.

Boulder County appeared to be hardest hit. Sheriff Joe Pelle said the town of Lyons was completely cut off because of flooded roads, and residents were huddling together on higher ground. Although everyone was believed to be safe, the deluge was expected to continue into Friday.

"It is not an ordinary disaster," Pelle said. "All the preparation in the world ... it can't put people up those canyons while these walls of water are coming down."

Jason Stillman, 37, said he and his fiancee were forced to evacuate their home in Lyons at about 3 a.m. after a nearby river began to overflow into the street.

Stillman, who was staying at a friend's house on higher ground, went back to his neighborhood in the afternoon and saw how fast-moving water had overturned cars and swept away homes at a nearby trailer park.

"From what I could tell, my house is sitting in Class 3 rapids," he said. When he returns, "it's going to be a sobering experience."

By mid-afternoon, some high-clearance vehicles were on their way to the town, where the Red Cross said about 200 people sought shelter in an elementary school. National Guard rescue helicopters were grounded by fog and low visibility.

To the north, residents along the Big Thompson Canyon in Larimer County, scene of the deadliest flash flood in state history, were also evacuated. The Big Thompson River flooded in 1976 after about a foot of rain fell in just four hours, killing 144 people.

Water roaring across U.S. Highway 36 south of Lyons prevented residents from leaving the Crestview subdivision, so Howard Wachtel arranged for someone to meet him at a roadblock for a ride to a gas station. He needed more gasoline to keep his generator running so he could pump water out of his basement.

"This is more like something out of the Bible. I saw one of my neighbors building an ark," he joked, over the sound of the rushing water.

Firefighters performed a daring rescue of two men trapped in vehicles in Rock Creek, east of Boulder. After rushing water collapsed a section of road, rescuers used a raft to reach the men, broke the car windows and lifted them to safety.

Some of the flooding was exacerbated by wildfire "burn scars" that have spawned flash floods all summer in the mountains. That was particularly true in an area scarred by fire in 2010 near the tiny community of Jamestown and another near Colorado Springs' Waldo Canyon that was hit in 2012.

Rain is normally soaked up by a sponge-like layer of pine needles and twigs on the forest floor. But wildfires incinerate that layer and leave a residue in the top layer of soil that sheds water. A relatively light rain can rush down charred hillsides into streambeds, picking up dirt, ash, rocks and tree limbs along the way. Narrow canyons aggravate the threat.

At the University of Colorado, about 400 students in a dorm were evacuated, and administrators canceled classes at least through Friday. About a quarter of the school's buildings have some kind of water damage.

One person was killed when a structure collapsed in the tiny town of Jamestown northwest of Boulder. Another person drowned in northern Boulder as he was trying to help a woman who was swept away in a torrent of water, authorities said. Boulder County sheriff's Cmdr. Heidi Prentup said the woman is still missing.

To the south, Colorado Springs police conducting flood patrols found the body of 54-year-old Danny Davis in Fountain Creek on the west side of the city.

Weather service meteorologist Bob Kleyla said a 20-foot wall of water was reported in Left Hand Canyon north of Boulder, and a firefighter radioed he was trapped in a tree. He said rescuers trying to get to him were initially blocked by debris.

"We did access him. They put him onto a sled and were able to take him across the creek, so he is getting treatment at this point," Prentup said.

The creek is usually "just a trickle," said nearby resident Carm Say. "You can walk across it and have fun. Now, as you can see, it's hitting houses."

At least one earthen dam gave way southeast of Estes Park, the gateway to Rocky Mountain National Park. Water levels could rise downstream as authorities release more water to ease pressure on dams. With debris piling up near bridges, downstream farming areas including Fort Lupton, Dacono and Plateville were also at risk.

In rural Morgan County, authorities urged ranchers to move cattle to higher ground as the mountain rains emptied onto the plains.

Rain showers and thunderstorms were expected through the night, with some storms capable of dumping an inch of water in 30 minutes, the weather service warned.