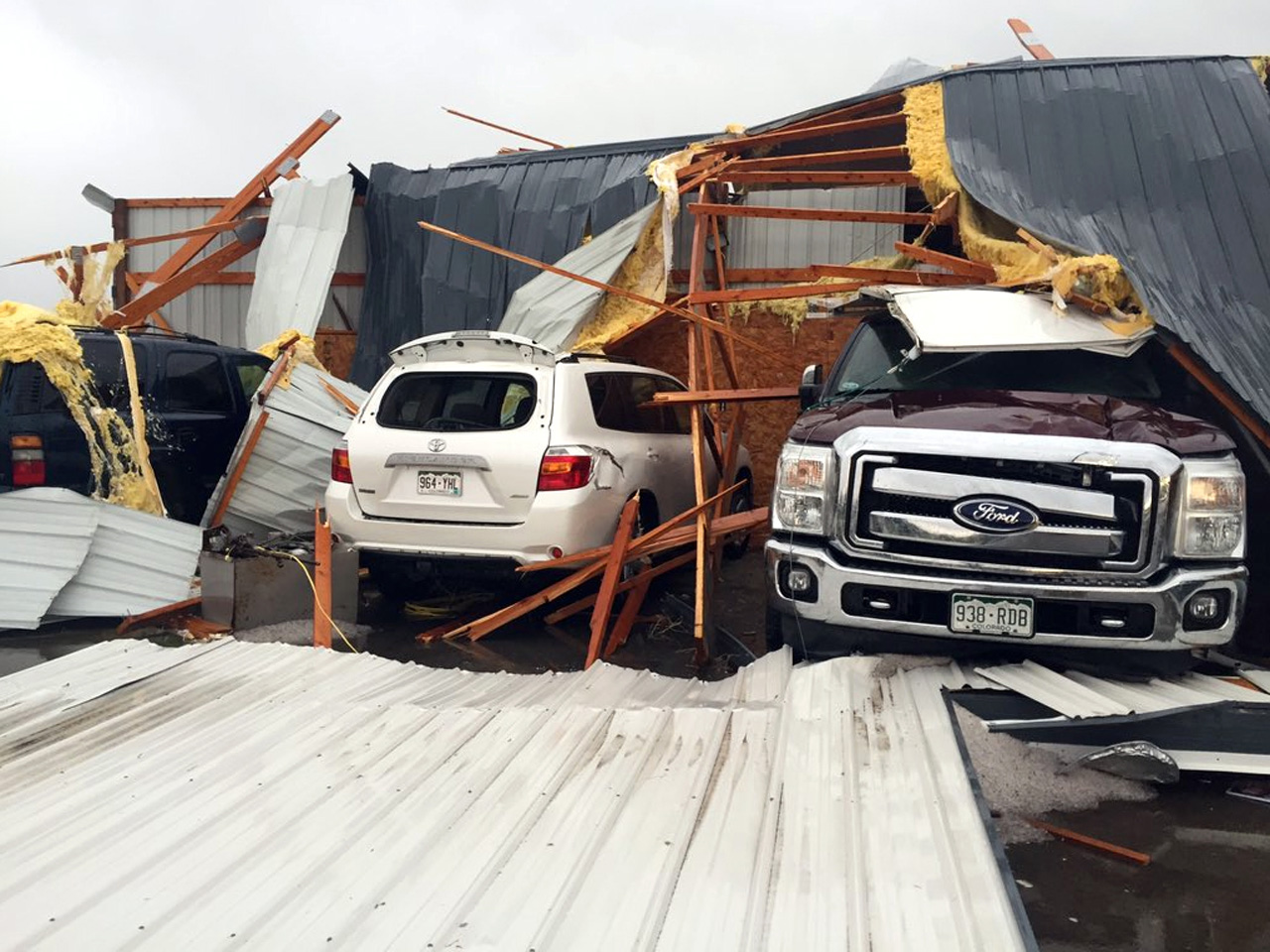 The National Weather Service said at least four tornadoes hit in Yuma County Saturday, about 100 miles east of Denver, near Colorado's borders with Nebraska and Kansas.

Many of the spring storms dumped anywhere from a half inch of rain all the way up to two inches of rain in a half hour to 45 minutes. Causing minor street flooding in parts of Denver and the Eastern Plains, reports CBS Denver.

Along with that many of Saturday's storms had marble- to ping pong-sized hail pounding the plains! With well over 2 dozen reports of large, damaging hail.

One of those twisters struck just north of the town of Wray about 6 p.m. MDT, and left five people with minor injuries, according to NWS Science and Operations officer Jeremy Martin.

Speaking in a telephone interview from his office in Goodland, Kan., Martin said that tornado also damaged some buildings and other structures.

Storm chasers reported that it traveled for about 10 miles on the ground.

"We had at least four tornadoes in Yuma," Martin told The Associated Press. "We're still trying to get an exact number.

He said that a survey team will travel to the area after daylight Sunday to get a better assessment of the storm and its damage.

There were no immediate reports of injury or damage from the other three confirmed tornadoes in the area.

Earlier in the day, officials said a tornado in Morgan County damaged about a dozen motorhomes and caused some minor injuries.

Bernie Meier, a meteorologist in the NWS office in Boulder, Colo., said the twister near the community of Wiggins, about 65 miles northeast of Denver, was one of at least two in Morgan County.

County Sheriff James Crone told The Denver Post most of the Colorado camper vehicles were unoccupied when the tornado hit, and everyone refused medical care.

The NWS had issued alerts for people to take shelter from large hail and severe thunderstorms as the storms moved through the Front Range toward the Nebraska border.

Forecaster said that the bad weather had eased by mid-evening but severe weather was possible further east in Kansas and northern Oklahoma Sunday.

Meanwhile, two people died and six others were injured in a series of weather-related traffic crashes in northern Arizona.

Around 10 a.m., a vehicle rolled due to icy roads and hail on Interstate 40 near the community of Ash Fork. Two people tried to help the occupants and were struck and killed by a commercial vehicle, authorities said.

Those wrecks caused a chain reaction of at least three more crashes. Six people were taken to Flagstaff Medical Center with non-life-threatening injuries.

A stretch of I-40 was shut down as troopers investigated, the Arizona Department of Public Safety said.

Elsewhere, a storm that pounded parts of Central and Southern California with heavy rain - causing streets to flood and closing key freeways for a time - continued to bring scattered showers Saturday. The rain was heavy at times, prompting weather forecasters to leave flash-flood warnings in effect.

Rain and thunderstorms could continue in the area into Sunday, forecasters said. The storm rolled in Friday.

Flash-flood warnings remained in effect for the mountain areas of Los Angeles, Ventura and Santa Barbara counties, as well as the Antelope Valley on the northern edge of Los Angeles County and Central California's Cuyama Valley.

"An unseasonably moist and unstable air mass will bring the potential for afternoon and evening showers and thunderstorms to the Antelope and Cuyama valleys and all the mountain areas from Los Angeles to Santa Barbara counties, excluding the Santa Monica range," the National Weather Service said in a statement warning travelers to avoid taking roads filled with swift moving water.

The California Highway Patrol temporarily shut down northbound lanes of Interstate 5 at the Grapevine mountain pass Friday evening due to flash flooding. The closure caused traffic on the freeway - the main route connecting Los Angeles and the San Francisco Bay area - to back up for miles.

Also Friday, a fast-moving thunderstorm dropped heavy rain on the Southern California cities of Ontario and Rancho Cucamonga, stranding drivers who got caught on flooded streets. The roof of a warehouse in the area collapsed under the weight of accumulated rain water.