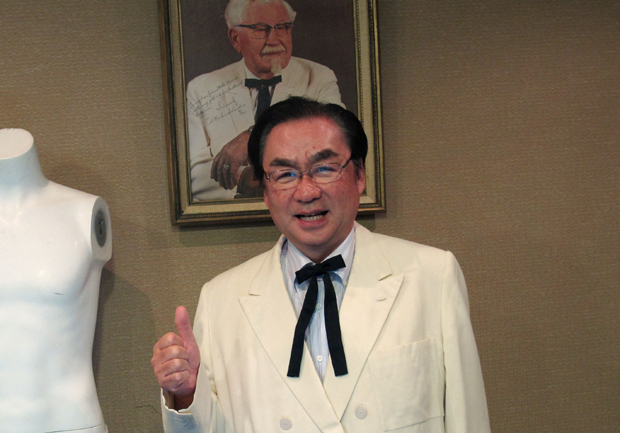 DALLAS The president and chief executive of Kentucky Fried Chicken Japan purchased the trademark white suit worn by company founder "Colonel" Harland Sanders at auction Saturday for $21,510 - then promptly tried it on.

Masao "Charlie" Watanabe grinned while putting on the suit jacket and black string tie at the Heritage Auctions event, standing beneath a photograph of Sanders. He had already planned to attend a company marketing meeting in Dallas, but arrived early after he found out about the auction, he said.

Watanabe was one of hundreds of in-person, telephone and online bidders vying for various items, including a gun belt owned by legendary outlaw Jesse James and leg irons that restrained abolitionist John Brown.

Watanabe also bought a mini-collection of Sanders' memorabilia - including his 1973 Kentucky driver's license - for $1,912.

Sanders is a popular figure in Japan, and most KFC restaurants there have statues of him in front, Watanabe said. He plans to display the suit at a restaurant in Tokyo.

"Every child in Japan knows Colonel Sanders' face and his uniform," Watanabe told The Associated Press through a translator.

Sanders was named a "Kentucky colonel" by the state's governor in 1935, five years after he began cooking meals for travelers who stopped at his gas station, according to his biography on the KFC website.

Earlier Saturday, the leg irons used on Brown after his failed 1859 raid on a federal arsenal in Harpers Ferry, in what is now West Virginia, sold for $13,145. The winning bidder declined to be identified.

Many scholars believe Brown's raid hastened the start of the Civil War as he escalated tensions between North and South by trying to incite an armed insurrection. The Connecticut native and some followers seized the arsenal, hoping to provide 100,000 weapons to slaves who never joined them. Brown later was hanged after going on trial in Virginia for treason, murder and inciting a rebellion.

James' gun belt, one of two that he owned at the time of his death, sold for $16,730. The buyer was not immediately known.

Ketanji Brown Jackson to be sworn in as Supreme Court justice Thursday
Thanks for reading CBS NEWS.
Create your free account or log in
for more features.
View CBS News In
CBS News App Open
Chrome Safari Continue
Be the first to know
Get browser notifications for breaking news, live events, and exclusive reporting.