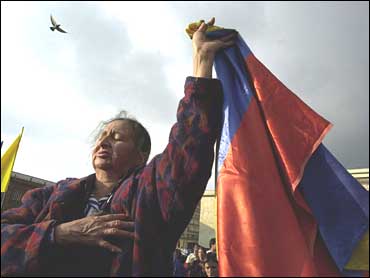 A Colombian senator was tortured and killed while attempting to convince leftist rebels to free two kidnap victims, police said on Sunday, blaming the slaying on FARC guerrilla fighters.

Sen. Martha Catalina Daniels was shot execution style with two bullets to the head. Her body showed signs of torture and was found in a ravine off a country road about 25 miles west of Colombia's capital, Bogota, police said.

Daniels' murder came ahead of March 10 congressional elections, now largely overshadowed by a wave of violence following the collapse in peace talks with the Revolutionary Armed Forces of Colombia, or FARC, late last month.

Authorities said Daniels, a member of the opposition Liberal Party, had been trying to negotiate with the FARC for the release of Ricardo Tafur Gonzales and Cristhian Mauricio Rodriguez, kidnapped by the Marxist-inspired rebels last year.

"Unfortunately, everything indicates that this is part of the terrorism being waged by the FARC," Colombian Attorney General Luis Camilo Osorio said.

Daniels was the fourth member of Congress slain since mid-2001, as Colombia's 38-year-old guerrilla war escalates. The conflict has claimed 40,000 lives in a decade.

The FARC, Latin America's oldest and largest rebel force, has not commented on the senator's murder.

Colombian President Andres Pastrana broke off three years of peace talks with the rebels late last month, following the FARC's hijacking of a commercial airplane and kidnapping of a senator.

The FARC, branded drug trafficking "terrorists" by the United States, kidnapped and are holding five lawmakers and presidential candidate Ingrid Betancourt — abducted on Feb. 23 — in hopes of swapping them for jailed rebel leaders.

The government has said it will not release rebels from prison. Last week, it rejected a FARC ultimatum giving Bogota one year to make an exchange before rebels take "appropriate actions," presumably killing their hostages.

In an opinion poll published on Sunday, Uribe, a former provincial governor and Harvard educated economist, had 59.5 percent support — enough to win the May 26 presidential election in the first round of voting.

A longtime foe of Pastrana's peace talks with the FARC, which never succeeded in stemming guerrilla attacks, Uribe had nearly twice as much support as his nearest rival, Liberal Party candidate Horacio Serpa, with 24 percent.

"We need a stronger show of authority, every day, to stop the violence," Uribe said.

Betancourt, a centrist candidate whose husband has vowed to continue her campaign despite her abduction, had less than 1 percent support.

Colombia, the world's largest cocaine producing nation, wants Washington to allow it to directly target rebels with the $1 billion in mainly U.S. military aid earmarked for the drug fight.

Washington — long wary of getting dragged into Colombia's guerrilla war — has said it will share intelligence with Bogota, but added that U.S. law restricts the use of military aid to Pastrana's "Plan Colombia" anti-drug offensive.