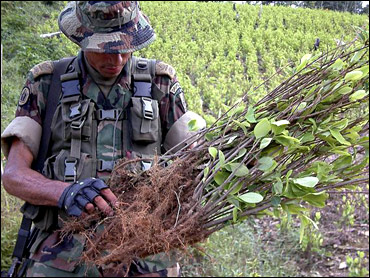 Outside a Bogota dance club called Pipeline, a bouncer frisks a young businessman, comes up with a small bag of cocaine, and casually returns it to the owner. He pockets it with a grin and swaggers into the maze of flashing lights and techno beats.

But this laid-back approach may not last much longer. A decade after Colombia legalized possession of 20 grams of marijuana and one gram of cocaine and heroine for private consumption, President Alvaro Uribe wants to restore total prohibition.

The reason: The world's largest cocaine producer has become a consumer nation with an addiction problem, according to experts, the government and drug users themselves.

The 1994 Constitutional Court ruling for legalization was aimed at forcing the government to find more effective methods than law-enforcement for combating drug abuse, such as education programs, says Sen. Carlos Gaviria, the former justice who wrote the decision.

But he complains that successive governments never invested enough time and money in the battle.

Meanwhile, drug use has increased by 40 percent in the last 10 years, says Dr. Camilo Uribe, a toxicologist and the president's adviser on drug matters.
No comprehensive study of domestic consumption has been carried out since 1996, but a 2001 survey by the government's National Narcotics Office found that nine of every 100 Colombian city-dwellers aged 12 to 25 regularly use drugs.

Dr. Uribe (no relation to the president) blames legalization for part of the increase, saying it made drugs more acceptable in a society that traditionally frowned upon them as a source of corruption and violence.

"The court decision sent the completely wrong message — that it's OK to do drugs," he says.

The push for criminalization marks a change from a few years ago, when liberal Colombian legislators were making the headlines by pushing to relax the laws even further. They sought to decriminalize drug trading, claiming the U.S.-driven war on growers and producers was getting nowhere.

But that initiative withered for lack of public support, and Uribe's election in 2002 buried it.

Uribe's presidency has been characterized by sternness against all enemies — Colombian rebels, corruption in politics, and drug use. But his attempt to criminalize drug use by referendum last year was killed by the Constitutional Court before the vote could take place. The court said prohibiting drug use would violate the constitutional right to free choice.

So Uribe is seeking a constitutional amendment, but it's unclear whether he can get Congress to approve the change.

Among the smartly dressed crowd at the Pipeline club, the cocaine sniffers say recriminalization would probably push up prices from their current rock-bottom level of $3-$4 a gram, compared with $75-$100 in the United States.

"Right now it's cheaper than buying a beer," a 33-year-old bank executive, who gives his name only as Guillermo, says after snorting a line of cocaine in the restroom.

Guillermo says outlawing drug use probably wouldn't change his habits much, except to make him more discreet. He agrees that legalization increased drug use, but also blames the explosion of bars featuring techno and trance music, which often prove more popular than traditional salsa fiestas.

Jennifer Cubides, chief psychologist at a juvenile detention center where many drug peddlers are incarcerated, is desperate to see tougher laws.

Her office at the Hogares Claret prison overlooks one of Bogota's most notorious streets, nicknamed "El Bronx," where dealers, pimps and prostitutes lurk in doorways and addicts loll lifelessly atop piles of broken cardboard boxes.

To Cubides' despair, the police can't or won't do much about it. The sale of drugs remains illegal, but suspected dealers can only be arrested if caught with more than the legal limit.

"They know exactly what their rights are," Cubides says. "The 1994 law was the worst thing that could have happened."

Cubides says she is convinced tough penalties will cut addiction.

Alejandro, a 16-year-old serving time at the prison for robbing two tobacco stores, says he believes legalization made it easier for him to deal drugs.

"The threat of imprisonment would turn people away," he says. "With more restrictions, it would obviously become more difficult for us."

According to the Drug Enforcement Agency, some 90 percent of cocaine that gets to the United States starts in Colombia or passes through it, making it a major battleground in the war on drugs.

Under "Plan Colombia," the U.S. has given military assistance to Colombia's efforts to eradicate coca crops and defeat the right-wing paramilitaries and left-wing guerrillas who allegedly profit from drug sales.

But internal policies are also a U.S. concern. In May 2001, the State Department said its Andean region policy included "supporting international anti-legalization efforts of non-government organizations" in the region.