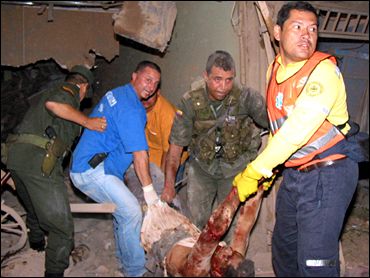 A bomb that leftist rebels planned to use to assassinate Colombian President Alvaro Uribe exploded Friday in a southern city, killing 16 people and wounding 30.

Police said the rebel Revolutionary Armed Forces (FARC) of Colombia set off the bomb in the city of Neiva as police discovered it on a search for explosives in advance of a planned presidential trip Saturday.

The explosives were found at a house near the airport.

Hernando de Valenzuela, chief of the local prosecutor's office, said the rebels had planned to blow Uribe's plane out of the sky as it passed low overhead.

Columbia has been wracked by civil war for 38 years and has lost 200,000 people to the fighting. Two main leftist groups, the FARC and National Liberation Army (ELN) joust with the government and right-wing militias.

Uribe, who has survived several rebel assassination attempts, is launching a crackdown on the insurgency.

Gen. Teodoro Campo, director of the Colombian national police, would not comment on whether the target was Uribe. But he said it was clear the rebels planned to use the explosives to attack an airplane, pointing out that the house lay along the flight path to the airport.

Sandra Tatiana de Serrato, an official with the state governor's office, said nine police officers and an investigator with the prosecutor's office were among those killed.

FARC, as the rebel group is known, is suspected in the bombing of an exclusive sports and entertainment club in Bogota, the capital, on Feb. 7 that killed 35 people and injured more than 100.