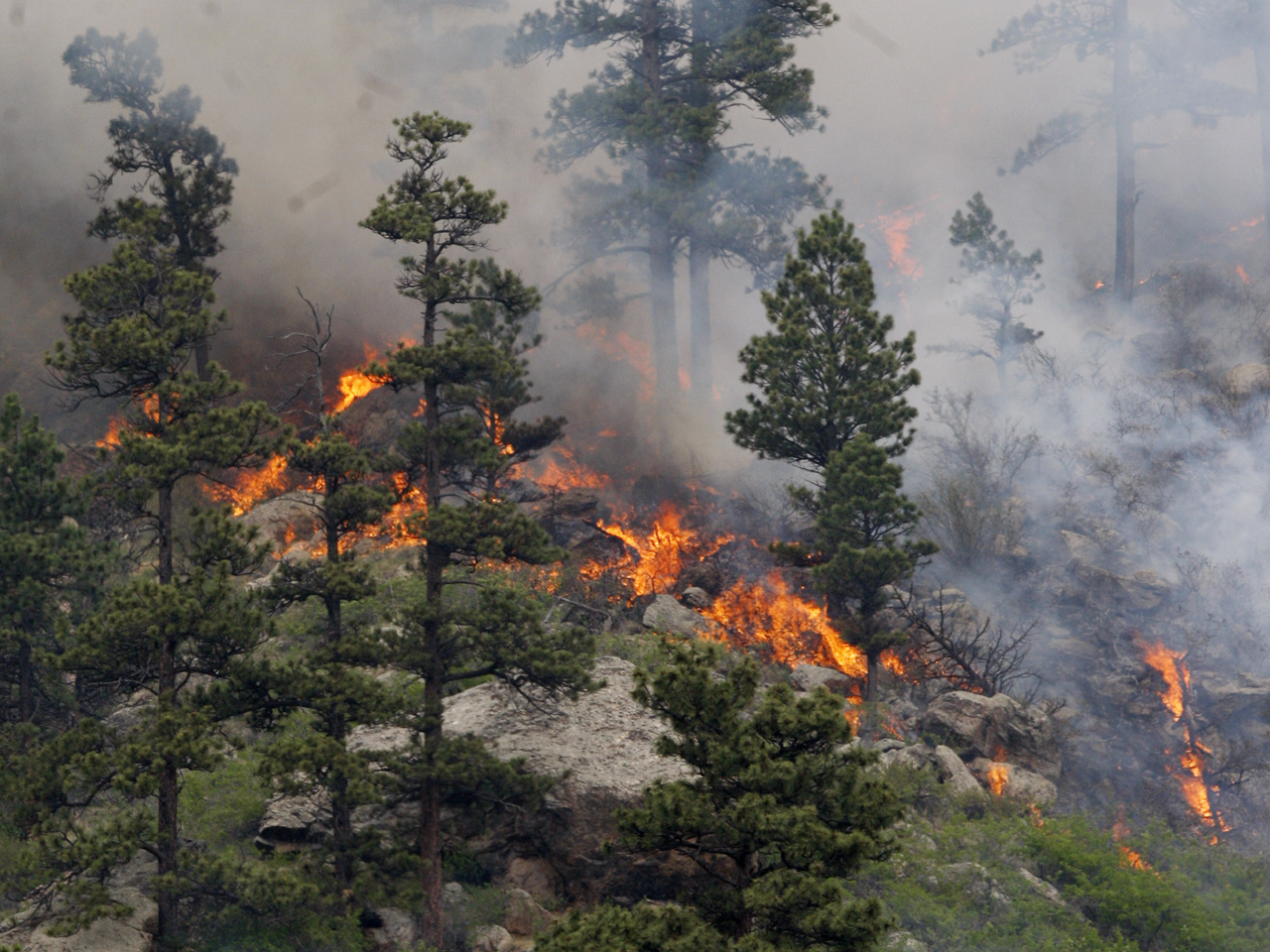 (CBS/AP) FORT COLLINS, Colo. - More firefighters are heading to a fire that has burned across more than 11 square miles in northern Colorado and is approaching a reservoir for the city of Greeley.

U.S. Forest Service officials said the blaze about 20 miles northwest of Fort Collins had scorched 1.5 square miles of land but rapidly expanded Thursday fueled by erratic winds. So far, the Hewlett Fire has burned 7,300 acres as of Thursday evening, according to CBS station KCNC in Denver, Colo. Eighty homes were evacuated, but residents who lived in 65 of them were allowed to return after the threat passed.

The blaze was one of several burning in the West. A fire in northern Arizona that led to the evacuation of a historic mining town grew to more than 12 square miles even as the outlook improved from earlier in the week.

The Colorado fire was approaching the city of Greeley's Milton Seaman Reservoir, but city officials said Greeley's water supply hadn't been affected as of Thursday evening.

Authorities ordered evacuations of about 80 homes near Poudre Canyon on Thursday, even going door to door to issue warnings. Residents of about 65 of those homes were allowed to return by early evening, with instructions to be ready to leave again if conditions change.

Some 400 firefighters were on the scene. Fire officials said more firefighters would be arriving Friday but did not provide an exact number.

According to KCNC, two of the 10 heavy air tankers in the U.S. used for fighting fires are currently being used. A third tanker is on its way to help with the efforts.

Officials think human activity started the blaze, which was first reported Monday, but they are still investigating.

The area has seen several large fires in the past 12 years, including a fire started by an abandoned campfire in 2000 that scorched 16.5 square miles and destroyed 22 buildings. A fire in 2004 started by a couple burning trash scorched 8,900 acres near the same area of this week's fire, destroyed a home and prompted the evacuation of 150 homes.

Area resident John Hasler said Thursday was his second time being told to evacuate in less than 10 years, and he doesn't plan to leave.

"I was more worried when that (2004) fire was coming through here," Hasler said. "It had already burned around 10,000 acres and destroyed a home and was moving with some force when it was heading here."

Hasler's home survived that fire. He said his home on 40 acres is now surrounded by a lawn of closely cropped grass. He said he feels confident he would be able to extinguish a fire with his garden hose.

In Arizona, Forest Service spokeswoman Michelle Fidler said that crews were focusing on slowing the advance of the near 8,200-acre blaze and prevent it from reaching communication towers.

Most of the 350 residents of the mountain community of Crown King, about 85 miles north of Phoenix, had already cleared out by Thursday.

The fire prompted an evacuation order Sunday and has destroyed three homes and a trailer. The blaze started at a home, but investigators were still working to determine the cause.

The Arizona Republic reported that the blaze was burning within five miles of Pine Flats, a hamlet of about 40 properties, and firefighters hustled to set a defensive line, clearing the area of trees and other fuel near homes that could be threatened.

Other fires dotted Arizona but did not threaten any structures, authorities said.

Meanwhile, separate blazes in northern and southern New Mexico cast a haze of smoke over the state but have not caused property damage or prompted evacuations, authorities said.

In California, firefighters are working to control a 100-acre blaze that burned across the border into San Diego County from Mexico, where it has scorched thousands of acres.

The Colorado fire is burning in a drought-stricken area of steep, rocky terrain scattered with dry ponderosa pine trees, grass and shrubs.

A thick smoky cloud over Fort Collins has prompted health officials to warn that children and people with lung or heart problems should stay indoors. The haze extended 65 miles south to Denver.