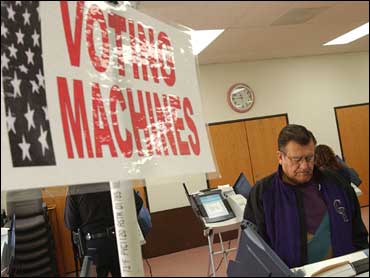 Colorado's top election official decertified electronic voting machines used in many of the state's largest counties Monday, calling into question equipment used in past elections in a move he said could have national implications.

Electronic voting machines used in Denver, Arapahoe, Pueblo, Mesa and Elbert counties cannot be used in the next election because of problems with accuracy or security, Secretary of State Mike Coffman said.

A number of electronic scanners used to count ballots were also decertified, including a type used by Boulder County as well as more than three dozen small to mid-size counties around the state.

His decision affects six of Colorado's 10 most populous counties and three of the four equipment manufacturers allowed in the state.

The manufacturers have 30 days to appeal.

Following a 2006 lawsuit that said electronic voting equipment was vulnerable to tampering and should be banned, Coffman announced in March that he had adopted new rules for testing electronic voting machines.

Coffman had also put Denver, Pueblo, Douglas, Montrose and Routt counties on an election watch list for problems in the November 2006. Pueblo has since been removed from the list.

"What we have found is that the federal certification process is inadequate," Coffman said, adding, "There are some issues here that need to be addressed."

The secretary said his decisions were based on an exhaustive review of voting equipment. During a news conference to present his findings he stood in front of stacks of boxes and a library of binders he said contained more than 160,000 documents on the state's four election vendors.

Coffman would not comment on what his findings mean for past elections, despite his reports that some equipment had accuracy issues.

"I can only report," he said. "The voters in those respective counties are going to have to interpret" the results.

Two kinds of Sequoia electronic voting machines used in Denver, Arapahoe, Pueblo and Elbert counties, were decertified because of "a variety of security risk factors."

Machines that scan and count ballots made by Hart InterCivic failed because "they could not accurately count ballots."

Hart is used in Boulder, Douglas and more than 40 other counties.

And both optical scanning devices and electronic voting machines made by Election Systems and Software (ES&S) did not pass muster. ES&S is used by Jefferson and Mesa counties.

Sequoia in a statement said it was reviewing the 175-page report on its system. Ken Fields, spokesman for ES&S, said the decertification was based on additional requirements recently imposed.

Peter Lichtenheld, a spokesman for Hart, said they planned to appeal based on how the state conducted its tests and maintenance of its machine. He said it appeared state testers ran the same stack of ballots through the machine several times, which could punch holes in the paper ballots and skew the results.

"Hopefully, we have a leg to stand on there," Lichtenheld said. "Our systems are used nationwide and they've been proven reliable and accurate across the country, so there's no reason why it should be any different in Colorado."

Sequoia and ES&S also said their systems had previously been tested for accuracy, reliablity, and security and would work with Coffman's office to meet requirements.

Only Premier Election Solutions, formerly named Diebold Elections Systems, had all its equipment pass the recertification.

Former District Court Judge Larry Manzanares, who handled the lawsuit seeking electronic voting machines' ban, chastised state officials for a sloppy certification process. He allowed the machines' use in the November 2006 election on the condition the state recertified the machines.

Opponents of the machines said they should not have been certified by former Secretary of State Gigi Dennis' office.

Several county clerk and recorders said they were digesting the findings Monday evening.

"This report is really just part of the larger equation for us," Denver Clerk and Recorder Stephanie O'Malley said in a statement. "Once we feel we have the full picture of what the Secretary of State's report means, we can move forward with choosing our systems and preparing for the 2008 election season."

Jefferson County's clerk and recorder, Pam Anderson, said "we will listen to (Coffman's) - perspective, then work to adjust our election procedures accordingly in order to ensure that the conduct of the 2008 elections is successful and every eligible voter has the right to vote."

The news comes days after Ohio's Secretary of State Jennifer Brunner urged Cuyahoga County to switch to the optical scan system - ballots filled out by hand and read by computer - in time for the state's March 4 presidential primary. She cited security flaws that make the electronic ballots vulnerable to tampering and the county's past problems with voting technology.
By George Merritt