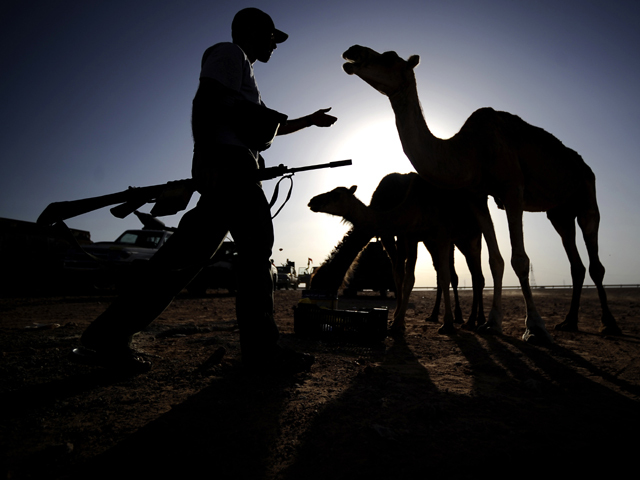 Like many of his fellow rebels in Libya, Ahmed El Maghrabi Saidi Barga brandishes a shotgun, sleeps under the night sky when a home won't take him in and wants to fight in Sirte, one of the remaining strongholds for dictator-in-hiding Muammar Qaddafi.

Unlike most of his compatriots, Barga expects to graduate from the University of California at Los Angeles next spring. His real name is Chris Jeon, a mathematics major, and he's closing out his summer vacation helping the rebellion, Emirati newspaper The National reported Thursday.

"It is the end of my summer vacation, so I thought it would be cool to join the rebels," Jeon told the newspaper.

The fighters gave Jeon the Barga name, what The National describes as "a mish-mash of the names of local tribes and areas." The 21-year-old doesn't speak Arabic, so whenever the language barrier hampers the conversation, he says his rebel name over and over, prompting his comrades to respond with cheers.

The National caught up with Jeon in An Nawfaliyah, a town between the port city of Ras Lanuf and Qaddafi's hometown of Sirte. In mid-August, Jeon flew from Los Angeles to Cairo. From there, he caught a train to Alexandria, Egypt, and then took multiple buses to get to Benghazi in eastern Libya, where he found some rebels willing to give him a ride to the front.

He's doing what he can to blend in, carrying a Russian shotgun he only recently learned to fire and wearing a keffiyeh and a necklace decorated with a bullet, The National reports. But he's probably the only fighter in Libya sporting a Los Angeles basketball jersey with the number of Lakers great Jerry West (44).

UCLA's fall classes are scheduled to start Sept. 22, but Jeon doesn't yet have a plane ticket back to the States. He flew to Africa one-way, telling the newspaper, "If I get captured or something, I don't want to waste another $800."