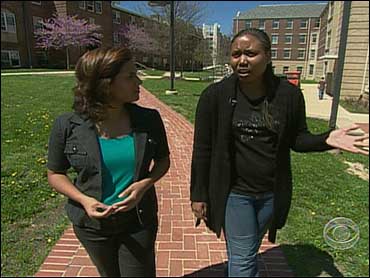 The nation's unemployment rate is soaring, inching closer to 10 percent with each passing month.

And that spells trouble for graduating college seniors, about to compete in the toughest job market in decades, reports CBS News correspondent Priya David.

Blake Taylor, a senior at Catholic University in Washington DC, expected to be an accountant when she graduates this May. But then her fortunes changed.

She had a job offer that was rescinded because the company says it's no longer hiring.

"It's hard; it's definitely hard," she said. "When they told me, I definitely felt like I had the air kicked out of me and now, I was just like, 'Ok, I'm at square one again.'"

The jobless rate among college graduates has more than doubled from a year ago to 4.3 percent. Almost 2 million college graduates are unemployed and a recent survey by the National Association of Colleges and Employers predicts companies will hire 22 percent fewer graduating seniors than they did last year.

"The previous 5 years it was a sellers market for these kids," said Ed Koc of the National Association of Colleges and Employers. "They could pretty much demand what they wanted in terms of a job and what they got from an employer. That's no longer going to be the case."

One place recent graduates can look for work is the U.S. government. The government has postings for more than 40,000 open slots right now and expects to increase hiring employees straight from college.

College senior Peter Donald expects to find a job in federal law enforcement soon. But fellow senior Bill Frame is still looking for work. He spent months trying for a job on Wall Street without success, and has now widened his search to other industries.

"This is an every morning thing for me now. I wake up and check my email and spend 20 minutes checking on the different job sites, then usually another half hour to an hour doing applications," Frame said.

"What we say to them is your first job may not be your ideal job and so be more flexible be more open to taking positions that maybe weren't on your radar screen originally," said Dr. Alan Goodman, a career counselor at Catholic University.

That's a message Blake Taylor, at least, has taken to heart.

An optimistic attitude that will help with the rigorous job hunt that lays ahead.