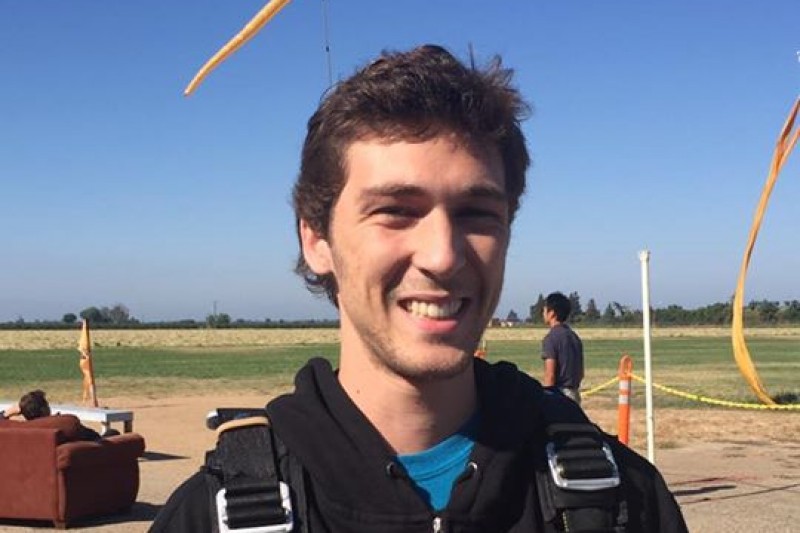 SAN FRANCISCO -- The mother of a skydiver who plummeted to his death with an instructor in a California vineyard said her teenage son was an adventurous spirit who was willing to try just about anything -- including the jump that was on his bucket list of things to do in life.

Tyler Turner, 18, had a mild case of cerebral palsy and walked with a crouched gait. His mother Francine Salazar said that didn't dampen his zest for life.

Turner had graduated from high school with honors and had been bound for the University of California at Merced this month to study biomedical engineering.

According to a GoFundMe page set up to help cover funeral costs, Turner was the youngest of four children.

On Saturday, Salazar drove Turner and his best friend to the Parachute Center in Lodi, east of San Francisco, where she says they joined two other friends and sped through a safety video.

Before going up in a plane, Turner knelt at the edge of the jumping area and said a quick prayer. He gave his mom a tight hug and told her he loved her.

He jumped while she waited on the ground, wondering which one of the tiny dots in the air was her son.

Turner and the instructor died when they plunged together to the ground after their shared parachute did not open.

Salazar said the instructor was found with his hand on the lever for a backup parachute but it was never pulled.

San Joaquin County sheriff's officials have not identified the instructor.

"One of the last things they wanted to do was go on a skydiving trip they've been talking about," Salazar said about her son and his friends, who jumped safely. "I hate for any other mother to go through this."

Salazar said she paid $175 for her son's jump, which included a video recording that is now in the hands of federal investigators.

The four friends filled out paperwork but didn't finish watching the safety video before they were hustled into gear, she said.

Salazar said she was appalled that the center continued sending people up to jump while she waited for word about her son. She thought the center might halt operations.

The Parachute Center stayed in business for the rest of the day Saturday, even after news of the jumpers' deaths, CBS Sacramento reported.

"I'm out there waiting for my son to be recovered, for hours, and they just kept jumping over my head," she said.

Bill Dause, owner of the Parachute Center, said the instructor was a veteran who had about 700 previous jumps. Dause said he sympathized but there was nothing he could do.

"It was just an accident," he told The Associated Press on Monday.

Dause told Sacramento television station KCRA on Saturday that it appeared "something may have gone out of sequence in the jump." He did not elaborate.

The wind and other conditions were perfect, he added.

In May, a small plane carrying 17 skydivers took off from the center and landed upside-down after clipping a pickup truck. People involved sustained minor cuts and scrapes.

In February, the Lodi News-Sentinel reported a solo skydiver died after a parachute malfunction at the center. Further details were not immediately available.